Onwards, onwards, through my alphabetical tour of my favorite comics in my collection over the years -- the end is in sight! 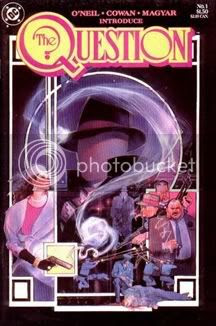 Q is for The Question #1

There are "minor" superheroes every comics fan has a thing for. They aren't the giant marquee heroes who get movies made about them like Batman and Wolverine, but they're still cool. I've got mine -- Black Panther, Omega the Unknown, Mr. Monster, The Atom, and the faceless man of mystery himself, The Question. Steve Ditko's Question has one of the best, simplest looks in comics -- a man in a suit, but with no face (thanks to a pseudo-science mask). The Question had a marvelous run back in the 1980s-1990s for DC Comics under writer Denny O'Neil, who for my money is one of comics' most valuable players. O'Neil has written tons of classic Batman, Green Arrow and more stories, and his edgy mix of humanism, relevance and good ol' action still holds up. The Question #1 is vintage O'Neil, a relaunch of the character who'd more or less been in limbo since his 1960s debut. There's a bit of Batman, a bit of the Shadow and a bit of Caine from "Kung Fu" in the Question, who's kind of a "zen detective." The stories are less about comic superheroes than they are tight little vignettes of the human condition. This is pulp crime comics close to their best, aided by superb art by Denys Cowan. Oh, and at the end of this very first issue the Question is beaten to a pulp, shot in the head and thrown in a river. Now that's a cliffhanger! 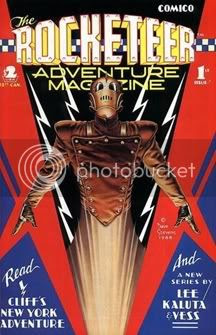 R is for The Rocketeer

Dave Stevens' "The Rocketeer" was pure pulp comic art, and it's a real shame there was so little of it. I remember first seeing the dazzling, near photo-realistic art of The Rocketeer back in the mid-1980s -- it was a revelation. The story wasn't anything visionary -- a charming 1930s adventure about a man with a rocket jet pack -- but the intensely detailed art was among comics' best. It didn't hurt that Stevens helped fan the Bettie Page revival with his thinly veiled inclusion of the pin-up queen as a character. There was a not half-bad movie too based on the series in 1991. Unfortunately, the gorgeous art showed how much of a perfectionist Stevens was -- it'd take him years to produce pages, and in the end his Rocketeer story was only a hundred pages or so. He died of leukemia in 2008, his comics output having slowed to a trickle over the years. He did an awful lot of "good girl" pin-up art -- and it was great stuff, never truly sleazy like much of the field. It's a real shame that he didn't leave us with more, but what Rocketeer work he did produce was "choice," as they say.