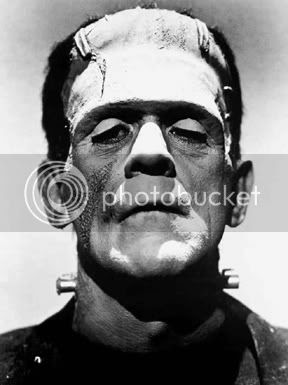 It's a little late for Halloween, but I've been in a monster movie frame of mind. The classic monster movies, that is, which to me have always been the Universal Pictures horror of the 1930s to 1950s -- Frankenstein, Dracula, The Wolf Man, et cetera. I loved 'em as a kid in the 1980s and lately have been on a jag watching some of these classic black and white flicks for the first time in 25 years or so. What's amazing is how well many of them still hold up, particularly those starring the man who I'd say was the king of monster movies -- the original and best Frankenstein's Monster, Boris Karloff.

Bela Lugosi's immortal Dracula seems to get more ink today, and Lon Chaney Jr's tragic self-loathing Wolf Man was also great, but Boris Karloff created a monster who defines horror. Try not to imagine Frankenstein's Monster as the cliched star of everything from breakfast cereals to video games to really bad Hugh Jackman movies. Instead picture the Monster as he first appeared in 1931, looming from the darkened screens. An abomination against life, a morality tale about man's desire to play god, a creature cursed for the way he looks.

The very first scene when we see the Monster in "Frankenstein" is remarkable. The Monster simply walks into a dark and gloomy room, almost unnoticed for a fraction of a second -- then the camera abruptly quick-cuts inward, two beats, to an extreme, silent close-up of Karloff's heavy-lidded, haunting eyes. It's still chilling 80 years after it was filmed. Karloff's portrayal is a marvel of economic emotion, terror and innocence all bundled together. The physicality Karloff brought to the Monster defines it; the locked-kneed, lurching walk, flailing hand movements, the monosyllabic grunts and groans. 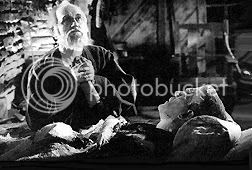 The famous "monster meets the blind hermit" sequence in "Bride of Frankenstein" is a bit hard to watch without bias today because Mel Brooks' "Young Frankenstein" did such a glorious job of sending it up, but try to picture it as it seemed in 1933. It's an amazing little character arc, as the Monster learns and grows an astounding amount in just a short time, from guttural grunts to emotion-packed short sentences. Treated with brief kindness, we see his potential, which makes what happens next that much more stinging.

The naked emotional need of the blind man and the Monster is startling. But what we're seeing here is a real attempt at human connection between two utter outcasts, a connection that is of course shattered by the outside world's cruelty. "Alone: bad. Friend: good." That line could have sounded awful done wrong, but Karloff puts just the right spin of hope and sadness on it. The genius of Karloff is in full flight in this scene, as he's alternately savage, needy and rocked with childlike glee. He helped form the whole "monster you feel kind of sorry for" motif we've seen everywhere from "King Kong" to "Twilight."

Karloff's skill is more notable when you compare his portrayal to that of other actors who've played the Monster -- in the many sequels to the 1931 movie we saw actors like Glenn Strange and Lon Chaney Jr. take on the role, but they lacked that almost-sweet innocence Karloff brought. What was a character of real tragic depth became the more familiar lumbering monster we now know, still cool, but not quite as shocking and strange as the half-human Monster Karloff created in the first three films. And Frankenstein's Monster on film since has never quite managed the power of the Karloff years.
Posted by Nik at 5:21 PM