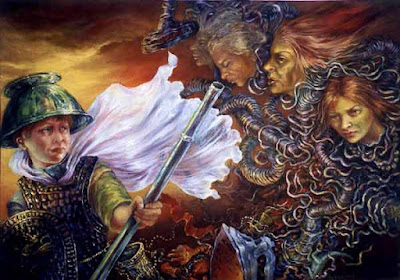 ...My mother-in-law, and a wife, mother, grandmother, artist. She will be missed. 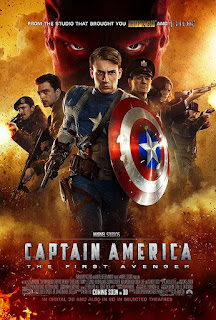 It may have taken me a week or two, but I’ve finally seen “Captain America: The First Avenger,” the red, white and blue wrap-up to our summer of comic book movies galore.

I have to admit I wasn’t quite as excited to see Cap as I’ve been other superheroes on screen – I’ve just never been a gigantic fan of the character, who walks a thin line between inspiring and hokey. Most of my comics experience with Captain America has been as a supporting character in “The Avengers,” although writer Ed Brubaker has been doing some great stuff with him in recent years I’ve been catching up on. But “Captain America” the movie, while not groundbreaking, is a solid, fun time at the movies, a rip-roaring and mildly retro war action picture that is more Indiana Jones in tone than “The Dark Knight.”

What I liked:
Chris Evans has now played two Marvel heroes in recent years – first the Fantastic Four's Human Torch - but Captain America is a tricky role. He's idealistic and inspirational, which can make for a dull character. But Evans does a solid job presenting the man behind the icon, particularly in the marvellous early scenes with a pretty seamless special effect that makes him a 90-lb weakling as young Steve Rogers. 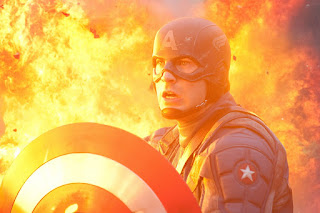 “Captain America” is quite tied into the whole overall Marvel movies mix, but it’s not done QUITE as intrusively as it was in “Iron Man 2” or “Thor.” There’s nifty little nods to the original Human Torch and Iron Man’s dad Howard Stark is a major character, and the ending is a natural lead-in to next year’s “The Avengers.” I love seeing old war comics heroes The Howling Commandos appear (seriously, did anyone ever imagine “Dum-Dum” Dugan would appear in a major Hollywood movie?).

Hayley Atwell makes a marvellous Peggy Carter, who’s both feminine and tough and has a naturalistic, unforced relationship develop with Rogers. Tommy Lee Jones is there pretty much for comic relief as the wisecracking old soldier commander, while Stanley Tucci provides a nice emotional heart in a few scenes as the doctor who gives Rogers his powers.

Director Joe Johnston did the beloved 1990s cult comic adaptation “The Rocketeer,” which “Captain America” almost feels like a sequel to. There's a great production design of 1940s New York that straddles realism and fantasy, and some fine visuals like the Red Skull’s flying wing of destruction and his proto-Stormtrooper armoured henchmen.

What I didn’t like:
Chris Evans, the flip side: once he gets pumped up into Captain America, oddly, I found Evans a little less interesting - the first half of the movie is captivating as we see how Rogers becomes Captain America, but once he does, it gets a bit routine. Probably my one big beef with Evans is that his Captain America lacks a certain authority, that leader of men feeling that the character needs. Even as the movie winds down, he seems a bit too green. I know it's the young Captain America here, but there's still a need for a bit more gravitas.

Hugo Weaving looks all grim and cool as the Red Skull, Captain America's evil doppleganger, but the character just feels a bit thin to me. Actually, I’ve had that problem with the comics Skull too, who’s just so darned evil and nihilistic that it’s hard to really feel any kinship with him. There's nothing that pushes him to a unique level like Heath Ledger's Joker or Terence Stamp's General Zod.

Overall, it hasn’t been a bad summer (or winter down here) for comics fans. I quite enjoyed both “Thor” and “X-Men: First Class,” and while “Green Lantern” was a financial and critical miss, it wasn’t the worst comics movie ever made and really suffers more because the bar has been raised so high the last five years or so.
Posted by Nik at 7:38 PM No comments:

Death changes how you listen to an artist. You can't help it. Try putting on Amy Winehouse's "Rehab" this week and not thinking about her lonesome end. It's pretty much impossible. Of course, eventually the shock of death fades a bit and it's just another song by the Doors. There's a ton of famed posthumous albums, from Nirvana's "MTV Unplugged" to Roy Orbison's "Mystery Girl" to George Harrison's "Brainwashed." 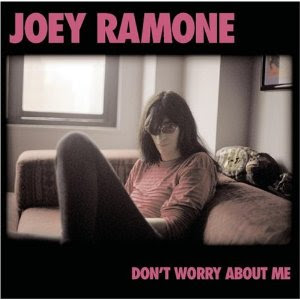 Some after-death albums are better than others, some are obvious record-company attempts to catch in on leftover bits and bobs (hello, Tupac Shakur!). Occasionally, you get one that's a defining final statement by an artist who knows the end is near. Warren Zevon's "The Wind," the latter albums of Johnny Cash, and one of my favorites, Joey Ramone's "Don't Worry About Me."

Is it morbid? Hipster nostalgia? Probably a bit of all of the above. But 10 years after his death, I still find myself listening to and enjoying a Ramones fan curiosity -- the only solo album by lead singer Joey Ramone, released a year after his death from cancer in 2001.

"Don't Worry About Me" doesn't break the Ramones mold. Short, sharp and punchy, it's got that distinctive Ramones sound but shot through with a slightly more introspective air, and underneath the punk/pop you realize this is a loose concept album about Joey's life, and his battle with lymphoma.

"Don't Worry About Me" is a 34-minute catharsis for Joey, recording the album from his sickbed. Look at the song titles -- "Stop Thinking About It," "Like a Drug I Never Did Before," the marvelous "I Got Knocked Down (But I'll Get Up)". "I Got Knocked Down" is a song for anyone dealing with the horror of their body or a loved one's body failing -- "Sitting in a hospital bed / I want my life," Joey sings. There's nothing too deep or metaphorical about this -- it's Joey's very real frustration, delivered with the same blunt passion the Ramones would bring to lines like "Now I wanna sniff some glue." But "Don't Worry About Me" isn't a downer of an album. With typically goofy Ramones songs like "Mr. Punchy" or a cover of the Stooges' "1969," it's a defiant, resilient album. He doesn't ask you to feel sorry for him -- hell, the final song is the title track, "Don't Worry About Me."

Off-center covers of Louis Armstrong's "What A Wonderful World" are cliche by now, but man, I still love Joey's take on it, which opens the album with an ecstatic blast, a punch in the face of death and fate. Knowing the singer is gone now, too young, lends it an extra poignancy -- is that manipulative, I suppose? But something being manipulative doesn't mean it isn't also based on truth. As last blasts raging at the darkness go, "Don't Worry About Me" is one of my favorites. Play it at my funeral.