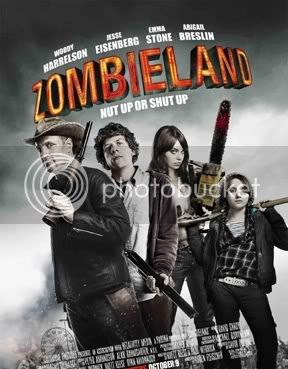 If the worst comes to pass and zombies do actually rise up and start feeding on the living, it's a good idea to be prepared.

Lists are smart. Do your cardio exercise -- it's wise to have a head start on the undead. Always check the car back seat -- there might be a zombie back there. Oh, and beware of bathrooms.

In the biting new horror comedy "Zombieland," nerdy student Columbus (Jesse Eisenberg) is one of the last people left alive after the zombie apocalypse. He's managed by making obsessive lists of survival tips, but soon hooks up with fellow survivor Tallahassee (Woody Harrelson), a gun-toting, impulsive redneck. Together the two take a road trip across a shattered America to find out if there's anyone else left.

Equal parts road-trip comedy and horror movie, "Zombieland" is a bit like an American version of Simon Pegg's modern classic "Shaun of the Dead."
Columbus and Tallahassee make a fine team as they travel. Mismatched buddies are nothing new, but the novel setting makes "Zombieland" a gory good time.

First-time director Ruben Fleischer has a witty, sharp style. While there are shocks and action, the characters are given equal time as they try to live in a strange ruined world. For Columbus, he hopes to find a surviving girl to fall in love with. For Tallahassee, nothing is as important as finding the last box of Twinkies snack cakes.

"Zombieland" boasts one of Harrelson's best roles in years -- his bogan Tallahassee is hilarious. And there's a cameo appearance by a top comedy star that has to be seen to be believed.

The pantheon of zombie movies is growing almost as fast as vampires these days, but "Zombieland" is lively undead fun. Just don't forget to check your back seat after the film.
Posted by Nik at 6:00 PM