Just three more letters to go in my Classic Comic ABCs as I wind through the ol' comics collection. Here's U through W! 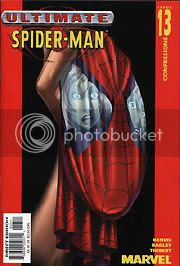 U is for Ultimate Spider-Man #13

I'm of two minds about Brian Michael Bendis. Bendis has becomes one of comics' top selling writers in the last decade, with his name on about half of what Marvel puts out. He brought a fresh, sharp eye for dialogue -- characters that speak like real people! -- and interesting "reinventions" that got a lot of ink. I wouldn't have thought Spider-Man, Wolverine and Luke Cage would work as Avengers, but he's more or less made it work. But on the other hand, Bendis' quirks can become annoying, and his dialogue can sometimes try too hard to be "hip." He also has a knack for starting a story in a gripping way and having it all fall apart in the end. But anyway, Bendis got his big mainstream start with "Ultimate Spider-Man," which should not have worked -- an "alternate" version of Spider-Man starting at age 15 or so, told from the beginning without all the burdens of existing stories? Yet "Ultimate" has often been more entertaining than the established Spidey in the past 10 years. This issue, #13, is one of Bendis' best -- no villains, no costumes, just an issue-long conversation between Peter Parker and his girlfriend Mary Jane as she learns his secret. Bendis' strengths for human interaction are in full flight here. A great single issue where nothing happens, but everything happens. 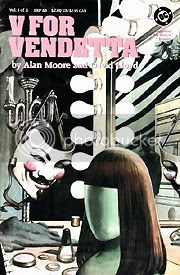 I've written about Alan Moore a couple of times here on this list, so this time, I'll turn to the artist. "V for Vendetta" is Moore's giant "F--- you" to the era of Thatcherism/Reaganism, and as chilling a story of paranoid fear and fascism as comics have produced. There was a movie based on this series a while back, which was better than I thought it'd be but lacked the omnipresent dread of the original. Much of the mood of this series comes down to David Lloyd, whose shadow-drenched art flowed richly on the page. He used chiaroscuro to give his work an incredible depth; the grime and decay of post-war London oozes off the page. The colours in the paperback I have are muted, dulled and nearly sepia in approach, letting the blacks dominate. Lloyd also devised the iconic look of the "terrorist" V himself, all dancing cape and frozen, ever-grinning mask. Back when I drew a few scribbly comics myself, I remember studying Lloyd's panels endlessly for tips. Moore's words often get most of the attention in his comics -- and well they should -- but in "V for Vendetta" Lloyd really rose up to become a totally equal partner in the series' creation. It's hard to imagine it drawn by someone else. 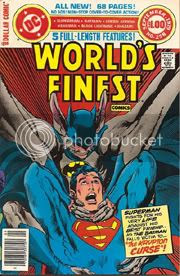 Some things just go well together. Peanut butter/chocolate, Lennon/McCartney, fish/chips, Superman and Batman. I've always loved the old "World's Finest" series that ran up to the 1980s where Supes and Bats would team every month in a comradely fashion and fight crime. Back then, Batman wasn't so grim and the duo had a real friendship that shouldn't have worked but did. This tale is hardly the best story of the era but I got it 30 years ago in 1979 -- it was one of these wonderful "Dollar Comics" DC did for a while, a 68-page anthology that besides the Dynamic Duo also included Green Arrow, Hawkman, Captain Marvel and whoever else was floating around at the time. The lead story this issue has Batman turning into... well, a were-bat thanks to some Kryptonian disease. It's the kind of story that scares the hell out of an 8-year-old -- Were-Batman was freaky, man! I can still read the yellowing pages and summon up how the story felt to read some 30 years ago. Batman and Superman still team up all the time these days but darn it, they never turn into werebats or battle giant dishwashing machines or aliens quite like they did back in the day.