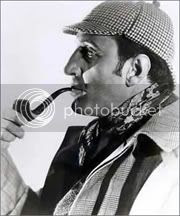 One of my favorite discoveries of 2009 was the venerable Sherlock Holmes. Oh sure, I knew who Holmes was, how can you not?

But while I'd seen a few old movies/TV shows with the character I'd never really read the original Sir Arthur Conan Doyle tales or discovered their rich charm. I picked up a nifty omnibus in Melbourne a few months back collecting the whole lot of them, and have been slowly working my way through.

The stories are great fun, classic Victoriana adventure lit that reminds me of Jules Verne (whom I read the heck out of as a kid). Sure, they're formulaic, but it's a winning formula. Everybody loves a mystery.

With many Holmes movies the perceived stiffness of the characters renders them museum pieces to a modern eye; but even though Doyle was writing from a very prim and proper time I find his words pack more life than some of the adaptations have. 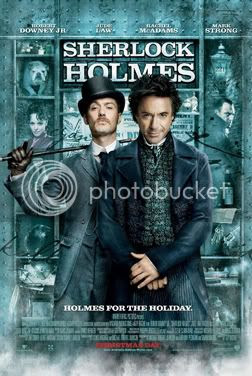 So while it's no masterpiece, it's a pleasure to see director Guy Ritchie and a lively Robert Downey Jr. attempt to rejuvenate the legend in their new film.

Ritchie gives Holmes a good kick in the trousers, knocking off the Victorian dust that's settled over the years. Read closely Sir Arthur's original stories, and you'll see lines about Holmes' boxing prowess, his cocaine habit, his raw moodiness. There's little here in this zippy new "Holmes" that flies in the face of tradition.

Instead, it plays up the quirk that was already there. You get a seething, funny performance by Downey, all tics and constantly spinning mind. One of the movie's best gimmicks is showing how Holmes works out the best way to win a fight in his head before a punch is thrown. Downey is frequently the best thing about the movie, which is a bit overcooked by hyperactive director Ritchie.

Jude Law makes a sturdy, jaunty Watson, showing the character as less of a buffoon although he is frequently outmatched by Holmes' wits.

Rather than giving us some "Sherlock Begins" origin story this film jumps in with the detective well-established. The plot loosely revolves around a death-defying master criminal (a sinister Mark Strong) and a secret society, and tosses in Holmes' unease about Watson's impending marriage. As a kind of love interest, Rachel McAdams is Irene Adler, the "only woman who bested Holmes."

Sherlock Holmes has become an icon, like Batman or James Bond, who's open to multiple interpretations. While the new "Sherlock Holmes" film might be a bit jumpy and modern for some, it's just the latest in a long line of cases the great detective has taken on.
Posted by Nik at 6:25 PM