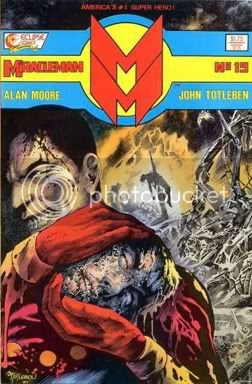 It is one of my great comics-collecting mistakes that about 8-9 years ago, I took a punt and decided to sell my entire run of Alan Moore's comic book series "Miracleman" on eBay. As the series was mired in lawsuits between various creative parties, the original issues were very rare and hard to find, and paperbacks were out of print. I figured I'd make my cash and inevitably within a few years the lawsuits would be settled and I'd get shiny new "Miracleman" paperbacks then.

More fool me! Sure, I made a couple hundred bucks, but as 2010 draws near, the "Miracleman" legal labyrinth remains a mess; in theory a settlement came up recently involving Marvel Comics but nobody really knows what it'll mean, or if the original Moore/Neil Gaiman series will finally be brought back into print. Likely, Marvel Comics will stuff out some markedly inferior "new" material first.

I hope the old stuff is reprinted soon, though, as it truly is one of the best superhero comics series I've ever read, and worthy enough to boast a repeat turn by Alan Moore in my "Comics ABCs" list after he turned up last installment with "League of Extraordinary Gentlemen." The comic I'd like to focus on today is 1988's "Miracleman" #15, otherwise known as the ultraviolent epic that blew young Nik's mind, man.

"Miracleman," when Moore first took to it in the early 1980s, was a then-novel concept -- superheroes done "realistic." Moore took an old British Captain Marvel rip-off character, "Marvelman," and reinvented him (*quick nerdy note: the character later became known as "Miracleman" when Marvel Comics objected to the revival; while fans tend to prefer "Marvelman," I maintain "Miracleman" is actually a better, more evocative name and that's the one I use). We've seen "realistic" takes on every superhero under the sun in the 25+ years since Alan Moore redid Miracleman, but few have done it as well. The idea of a man who says a magic word and turns into someone else was nothing new, but Moore gave it real thought over "Miracleman's" run. He was joined for the final issues by John Totleben, one of comics' best artists, who leant an almost Renaissance painterly feel. By the end of Moore's series, a final battle was set up between Miracleman and his one-time young protege, the now hopelessly insane Johnny Bates, "Kid Miracleman." 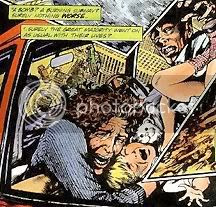 And that's where the mind-scarring came in. "Miracleman" #15 is relentlessly intense, a purgative burst of horror in a full-scale battle issue that devastates London and sees Johnny Bates turn its citizens into his own hideously inventive slaughterhouse. John Totleben's art for this issue is gorgeous and awful -- packed with hideous, intricate details of what an insane superhuman really could do in a city -- skinned corpses hanging on a laundry line, cars hurled into the sky with screaming cargo on board and perspective horribly skewed, a pile of human heads -- trust me, this comic gave me nightmares and ain't for the kids. But Alan Moore didn't just deliver exploitative carnage without a kind of moral; in #16, we see Miracleman's reaction to this battle -- he and his comrades systematically take over human society, remaking it into a kind of utopia. By #16's end, the entire world has changed -- war, crime, money, even death is eliminated, and Miracleman is basically its benign dictator. There's a cost for having superheroes in "real life."

The series theoretically continued from that point, with some very fine issues by Neil Gaiman examining this brave new world, but as good as they were, they couldn't help but seem a bit redundant. In the space of two issues, #15 and #16, Alan Moore pretty much deconstructed and rebuilt the superhero to its omega point. Many writers have gone there since, but none have quite succeeded for me in capturing the superhuman as Moore and Totleben do with their final graceful shot of a no longer slightly human Miracleman, gazing at the glacial perfection he's created from the ashes of London. This is the superman. This is where heroism ends.