...And finally, we reach the end of the alphabet of my Classic Comics ABCs. Took me a little longer than I thought it would to make a journey through the ol' comics collection and some of what I've read and loved these past 25+ years, but 'tis been kinda cool, too, doing brief looks at everything from "A for Amazing Spider-Man" to "Z for Zap Comix." And without further ado, away we go into the end of the alphabet! 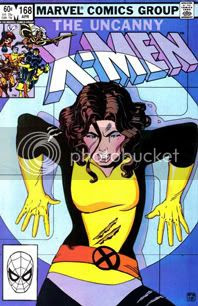 If you were a teenage boy reading comic books in the early 1980s, at one point, you had to fall in love with Kitty Pryde. It was the total 12-year-old kid kinda crush, nothing creepy, but the youngest X-Man -- the reader's viewpoint on the team -- was kinda adorable. For me, the prime X-Men era will always been circa #160-#200 when Paul Smith and later, John Romita Jr. were on the artwork with writer Chris Claremont. Yeah, the earlier Claremont/Byrne issues are awesome stuff too, but I didn't read them till much later. Unfortunately, the "X-Men brand" has been so utterly diluted in the years since by endless spin-offs, impossibly complicated continuity and everything from movies to action figures to beach towels that it's hard to forget how simple and revolutionary they once seemed. Unlike the rather stiff Justice League or Avengers or even Fantastic Four, the X-Men in the 1980s seemed real. Chris Claremont had his flaws but at his best, he utterly got the whole outcasts fighting for a society that hates them motif. This issue is a great sampler of the era, featuring Smith's terrific cover, with young Kitty "booted out" of the X-Men for the new younger trainee team. She has a tantrum, fights some stowaway aliens, wins Professor X's respect and is back on the team, the end. It's got superb Smith art and doesn't meander all over like most X-Men stories do today. And man, did I love that Kitty Pryde a bit. 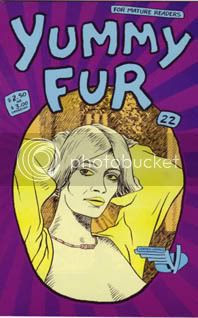 Chester Brown is one of indie comics' most interesting creators. His works include the sicko surreal fantasy "Ed The Happy Clown," strangely direct Bible adaptations, Canadian historical nonfiction -- but my favorite of his work remains his unsparing, gripping autobiographical stories. Towards the end of his run of "Yummy Fur," Brown started telling tales from his childhood, focusing on the small moments of being a nerdy kid growing up but making all these moments add up into a rather devastating portrait of boyhood. My favorite among these is "The Playboy," a tale about, well, Brown's first issue of Playboy, and his obsessive compulsive attempts to hide it, his shame, shredding it, hiding the bits again and so on. I won't say I ever did such a thing (no really, I won't) but Brown's eye for detail and his fine, almost wood-cut like art take tiny moments and make them big. He's rather unprolific now compared to what he once was, but Chester Brown is definitely one of comics' greats. 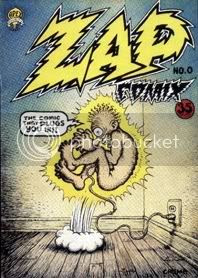 It's appropriate to end the ol' Comics ABC with Robert Crumb, who helped mark the delineating line between "kid comics" and "adult comix" with his seminal '60s work, including this here issue of "Zap Comix." I'd characterise myself as a "middling" Crumb fan – I'm a huge admirer of his draftsmanship and his ability to let his id utterly flow forth onto the page, although sometimes he gets a little too id for his own good. I find he works best in sampler packages like the "R. Crumb Coffee Table Book " or his excellent sketchbook collections. And then there's the movie "Crumb," which I'd easily put in my top 5 documentaries of all time list -- rarely has a creator let himself be so thoroughly dissected for the screen, and it's a fantastic film. "Zap Comix" #0 is a total artifact of its time, all hippie dreams, Mr. Natural, raining meatballs and Crumb's vaguely disturbing stereotypical drawings of women and black folks. It's a perfect little peek at his odd mind, and while I think he'd go on to do much better work in years to come, "Zap Comix" is still 100% pure Crumb. So we start with Spider-Man, and end with Crumb. That's comics for you!