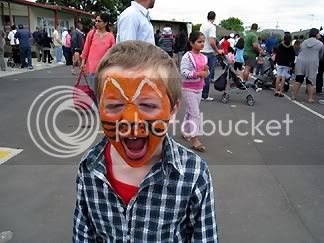 So the beginning of the boy's first school year was weird and strange and fun -- but the end of it is even odder to me. Down here in upside down down under, the school year ends just before Christmas and starts up again in February, so Peter's on his final day in Year 1 of primary school today. He found out his next teacher and classroom that he'll start up with Year 2 in 2010, and got his very first school report. It's got to be a bit tough, having just gotten used to his little group of friends and familiar faces, and then moving on to the next one. It makes me feel weird, too -- first "end of term," first of many more to come, the kind of realization that school isn't just a one-off thing but a years-long journey for the boy.

He is doing pretty well, all things considered. It's been a bloody rough year for our family in a lot of ways with two grandparents battling cancer, but he's been strong at school and his reading and imagination are tops. There's more than a fair share of discipline and obedience battles and there are times when you just think life was easier when we had two cats instead, but so it goes. Peter gets a break now with mom for a while and then he goes back in February -- not one of the newest kids, but moving on up the old school food chain.
Posted by Nik at 12:01 AM