This is the end, my friends... 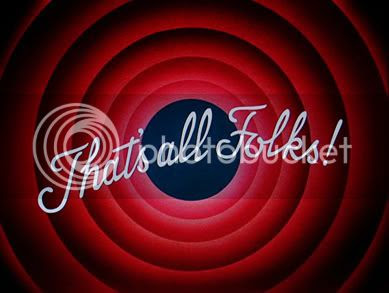 I've been blogging, not daily, but at least a couple times a week, for just shy of 6 years now -- exactly 1,101 posts, starting all the way back in Roseburg, Oregon, in April 2004, and wrapping up at the end of 2009 in Auckland, New Zealand. I've been mulling over quitting for a couple of months now, trying to decide if I was "sure" or not, but in the end it boils down to I feel like I've said most of what I wanted to say here, and I don't want to just keep doing this blog as a chore. I could stumble on for a while longer, but I'd like to try and turn what little spare-time creative energies I've got in a different direction. I won't quit writing, but it's time for something else.

I've really enjoyed doing this blog, and I know I will miss it more than a little bit, especially when the itch hits to rant and ramble on something. The longevity of as new a medium as blogging is uncertain -- some folks do it once or twice and flame out, some carry on daily posts for years and I tremendously respect that. I figure I ended up somewhere in the middle; 6 years is a decent run in today's world.

I never wanted to make this a "one subject" blog so I have written about any variety of things -- books, movies, music, comics, journalism, and of course, chronicling the ins and outs and ups and downs of plans for and migration to New Zealand in 2006. And I started this blog just a couple months after we had our bouncing baby boy Peter, so there's been a lot about what it's been like being a dad on here. I also ended up doing a lot of writing for the fine site BlogCritics as a result of this site, and had a great time doing that and polishing my critical skills.

There's a heck of a lot of fine people I have "met" through this blog, several of whom I've actually gone on to hang out with in person. They're great bloggers and quite interesting folks who have commented or linked a lot. A decade ago I would've said making a "friend" on the Internet was a bit creepy, but many of these folks I've met thanks to this blog are great and not at all creepy -- Ash, Arthur, Andru, Bob Temuka, Roger Green, Mike Sterling, Patrick, Johnny Bacardi, Daniel M., Tom The Dog, Largehearted David, Greg, Mandy, Fred Hembeck, ADD, Uncle E, Beaucoup Kevin, Jeff Parker -- I'm proud to call a lot of you my friends (or at least not mortal enemies) and I'm sure there's many I've left out.

And there are tons of others, friends old and new, who have stopped by to read my words-- every time someone has left a comment on here, I've been gratified, and even if you've been reading and never left one, I still appreciate your time.

I'll still be lurking around the Internet someplace, of course and plan to keep reading the many great blogs out there, some of which are on the blogroll. Thanks again for reading my meanderings these past 5 3/4 years and have yourself a most excellent 2010!
Posted by Nik at 12:01 AM

Email ThisBlogThis!Share to TwitterShare to FacebookShare to Pinterest
Labels: hiatus