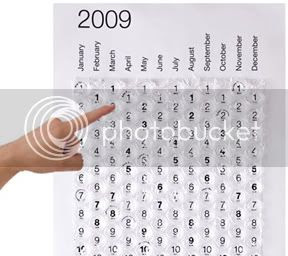 1. What did you do in 2009 that you'd never done before?
Saw the boy off to start school; dealt with cancer in the family; saw Neil Young live; celebrated 10 years of wedded bliss; rebuilt a front page in about 10 minutes to get Michael Jackson's death in; visited Melbourne, Australia.

2. Did you keep your new years' resolutions, and will you make more for next year?
I don't make the things. Less grief.

3. How will you be spending New Year's Eve?
Valiantly trying to stay awake but likely failing.

5. What countries did you visit?
Just crossed the ditch to Melbourne in Australia. Also went to South Island which is kind of like another country. Hoping to visit the ol' American homeland in 2010 but will see...

7. What date from 2009 will remain etched upon your memory, and why?
April 17 was quite nice as we were on our South Island trek and had a fine, if incredibly curvy driving, journey going up the hill from Motueka over to Farewell Spit, on the very very tippy northwest corner of the South Island. We got to this very remote and gorgeous hobbity beach and it was nearly deserted, and a whole school of baby fur seals were playing in water pools just a few feet away from us. Awesome.

8. What was your biggest achievement of the year?
Finally getting our house into decent shape by painting every room, building a nice trellis outside and buying the last furniture we lacked.

9. What was your biggest failure?
Controlling the devil temper.

10. Did you suffer illness or injury?
The usual minor aches and pains for someone suddenly pushing (urk!) 40.

11. What was the best thing you bought?
The flash new LCD TV and a new sofa set. Also the most expensive things we bought!

12. Where did most of your money go?
The mortgage, of course. Also big ticket items like new gutters, new couch, that kinda thing. Lots of little dribs and drabs onto the usual comics/movies/music of course....

14. What do you wish you'd done more of?
Writing/drawing. Also exercising.

16. What was your favourite TV program?
We totally got into watching Showtime's "Dexter" this year and have ripped through the first three seasons. Michael C. Hall is so great he makes me forget "Six Feet Under."

17. Do you hate anyone now that you didn't hate this time last year?
Hrm... no, hate is a strong word. "Tired of" is better.

19. What was your greatest musical discovery?
Old music: I'd never really listened to the 13th Floor Elevators/Roky Erickson prior to this year and really got into their utterly batshit psychedelic rock. Newer music: Finally got into exploring the Eels and their great discography. Newest music: The superb Grizzly Bear's evocative gem "Vecktamest."

20. What was your favorite film of this year?
Still an awful lot I haven't seen, but so far -- a tossup between "Inglourious Basterds" and "Moon," I think.

21. What did you do on your birthday?
Ate yummy noodles at a noodle bar with the family and watched Kenneth Branagh smoulder in the BBC's "Wallander."

22. What kept you sane?
Wife/boy/sunny days. Some days boy did the opposite though.

24. Who was the best new person you met?
Not to put him on the spot but it was a pleasure to meet Bob, a NZ comics nut/ blogger/journalist whom I have a lot in common with.

Email ThisBlogThis!Share to TwitterShare to FacebookShare to Pinterest
Labels: memes