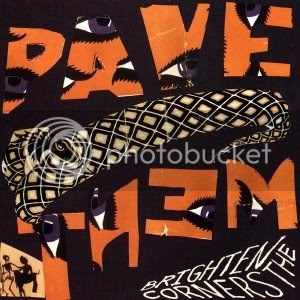 • Here's a marvelous appreciation of the band Pavement by Tim O'Neil which I found quite interesting. They are the quintessential California slackerdom '90s band; when I first discovered them I was living in Mississippi but they always reminded me of something strange and remote about my homeland. I clearly remember driving down the lonesome road from Oxford to Tupelo with a girl I knew I liked but couldn't figure out how to deal with, "Brighten the Corners" was on the car stereo, she made a comment about how she didn't like it and I knew that was probably it for us. When I lived for a year or so down near Modesto, a short hop from Pavement's hometown of Stockton, I listened to 'em constantly. Their mellow surrealism was the perfect tonic for life in the California Delta. (About three months until I get to see them play the first show ever on their reunion tour, y'all!)

• I am a man of eclectic tastes and I guess I see no wrong in both Genesis and the Stooges being voted to enter the Rock and Roll Hall of Fame's Class of 2010, even though it'd be hard to get two less alike bands. ABBA, I'm less sure about (ABBA is just one of those things that has totally passed me by in life). But I know one thing -- I'd pay one MILLION dollars to see an all-star jam between Genesis and the Stooges at the end of the night of the induction. "Sus-Suss-Sussudio and Destroy!"
Posted by Nik at 10:04 PM