In memory of the humble Christmas card 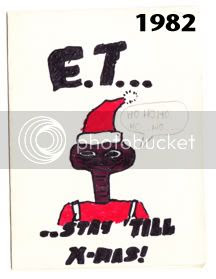 I guess I hadn't really noticed it, but the old Christmas Card pretty much died off during this decade, didn't it? I never got a flood of cards, but back in the 1990s I remember getting a couple dozen which has slowly eased off to a trickle these days -- we might get a couple of cards a year and they're almost always from folks over 50. What with the Facebooks and Twitters and blogs and such the annual card doesn't seem as necessary a way of catching up, I guess.

I stopped sending Christmas cards myself 5-6 years ago I think; I did an "email card" or two for a while there but now, well, thanks to the Internets I'm pretty much in touch with you if I want to be and if I don't want to be it doesn't really matter, does it?

I did always like cards, though, like the "ET" one above I made my parents in 1983 or so. For a while there, I was a real nut for elaborate handmade Christmas cards -- back at the end of high school and on into college, after I'd moved across country, I made a huge production of the annual card, when email was science fiction and real mail letters were how I kept in touch. 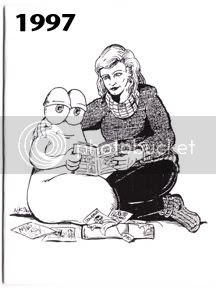 My first card circa 1988 or so was a drawing of my little comic characters, and the next year, I branched out into collage. I painstakingly cut dozens of little photos out of magazines of pop culture icons of the age like Vanilla Ice, Sinead O'Connor and Sting and glued them into my cards, combining them with artwork to create kinda nifty (if I do say so myself) little panoramas. I then made color photocopies and mailed them out. I tried to top myself each year -- the last year I did the collage I had more than 100 little figures and photos on the page, had repetitive strain in my hands from the scissors and Xacto knives and decided that was about enough.

Sadly, I really, really was hoping I could dig out some of these collage cards to show here, but can't find them -- I suspect they're buried in a box in my parents' basement in California. But I did make other cards, up until 1999 or so -- using PhotoShop or my own drawings instead of scissors.

Christmas Cards are one of those things that have kind of faded away from my life, though, and I guess in 2010 they start to look a bit archaic. I don't miss getting them, not really, as other things have taken their place, but I did kind of like the curious effort I put into making my own for so many years.

Merry Christmas to all you out there!
Posted by Nik at 6:49 PM