Life would be a whole lot easier if we'd invented teleportation by now, don't you think? I mean, for one thing, you wouldn't have to invest 24 hours of flying, driving and driving some more to go to New Zealand, for one thing. Someone needs to get on this, post-haste.

• ITEM! The best thing about coming back from vacation is MAIL, of course. Approximately 15 magazines, a box of comic books, some CDs and DVDs, and the wayward bill or thirty. If you want me, I'll be in my room. Since ostensibly I'm still a comics blogger, I'll try to review some comics later this week too. Oh, and I've got about a half-dozen CD reviews for BlogCritics I need to work on. Vacation is over... 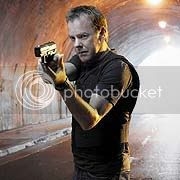 • ITEM! Ultra-violent, near-fascistic and frenetic as all hell, "24" is rapidly challenging "Lost" for my favorite drama on television these days. We sat through a mini-marathon catching up on the last several hours of "24" over the weekend, and then watched last night's episode as well. The bloodshed! The brutality! The manliness! Jack Bauer's world is gleefully cartoonish and over-the-top, yet played with utter straightness by the cast, including the incredibly good Kiefer Sutherland (Could anybody else sell the inate lunacy of Jack's 24-hours-o'-mayhem like Sutherland does? The man is fantastic). In the last two episodes alone, we've seen three major cast members killed off as this season's battle with the terrorists hurtles along. All this and the return of '80s stars like Peter "Robocop" Weller, C. Thomas "Soul Man" Howell and Ray "Twin Peaks" Wise! Season 5 might just be the show's best yet, as the producers have managed to balance nonstop movement with a little more human drama and slightly more plausible plots (and thankfully, no more cougar attacks). Gregory Itzin's weasely President Logan is a particular delight. "24" is a thrill ride, one even a softy liberal like me can enjoy despite its rather conservative bent (Torture a suspect? The question isn't whether to or not, but how many fingers Jack Bauer will take off). It's not a world I'd want to live in (and I certainly wouldn't want to work at CTU, the elite counter-terrorism unit that has all the social skills, ego tripping, panic attacks and cliques of your average high school senior class), but it's a great blast to visit for an hour each week.

• ITEM! Cool blogger Bill Sherman did a nifty track-by-track analysis of that hyperbolically titled "Perfect Songs" Volume 1 CD yours truly did a little while back. Thanks for the in-depth look, Bill; I guess you're not down with Eminem, but I'll freely admit the man's an acquired taste!

• ITEM! Happy birthday today to my mother-in-law Sylvia! Sorry we couldn't stay long enough to celebrate, but we had a party in advance; and Peter got no less than FOUR birthday cakes over the past month, so he's happy.
Posted by Nik at 6:01 AM