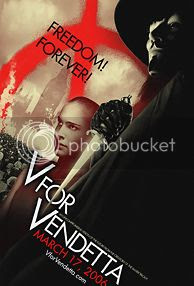 Do the ends justify the means? That's the question of "V For Vendetta," which shows us a dark future where America is destroyed and a fascist regime has taken over England. Out of the oppression rises a masked revolutionary, V, who promises to bring back freedom.

Produced by and with a script from the Wachowski brothers (creators of the "Matrix" trilogy) and directed by their longtime collaborator James McTeigue, "V For Vendetta" is probably the most subversive movie to open at #1 at the box office in a good while. It sacrifices some of the intentions of Alan Moore, who wrote the original graphic novel it's based on back in the 1980s, but it still keeps a lot of that seminal work's ideas. Beautifully shot and executed, it's trying to be more than just another action flick. 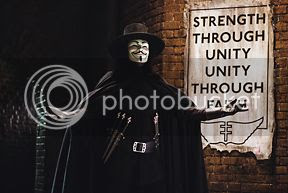 Moore has disowned the movie, which is a bit of a shame, because it's by far the best of his works made a film. (His name doesn't even get mentioned in the credits, which even though I know it's his fervent wish, feels a bit wrong to me – the man did come up with 90% of the movie's ideas, after all.) This is no "League of Extraordinary Gentlemen" abomination – it hits most of the graphic novel's plot points, and feels sincere, striving to be a bit more than your typical action blockbuster. It takes superhero-movie cliches, such as saving the damsel in distress, and twists them in interesting directions — what if the guy who saves the girl is also totally insane?

The Wachowskis and McTeigue have taken Moore and artist David Lloyd's grim fantasia spawned from 1980s Thatcherism (with more than a dash of "1984" and "A Clockwork Orange") and updated it well for modern times. "V for Vendetta" feels timely and raw in a way it wouldn't have in the Clinton years. There's clear parallels to the Bush/Blair war on Iraq, and the questions about how far a population will let fear push them. 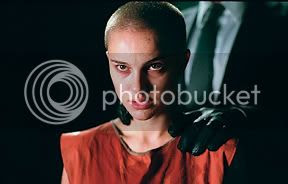 Natalie Portman is excellent as Evey Hammond, who goes from shy by-stander to co-revolutionary under V's tutelage. Portman is a fine actress whenever she's not in a George Lucas movie, and her work here – from wallflower to catharsis – is heartbreaking. She plays off Hugo Weaving (Agent Smith in "The Matrix), or rather, Weaving's voice, which is all you ever get from the masked V. Weaving wrings a lot out of a character that doesn't even have moving lips, and is a verbose, vivid force of nature as the vicious V.

What doesn't work? Well, the rather dry subplot of a detective investigation seeking V, despite featuring the excellent Stephen Rea as the lead g-man Finch, sucks the air out of the room in several scenes, and a large sprawling government conspiracy added to the movie isn't necessary. And then there's the ending — which I won't spoil for those who haven't seen it, but it's very different from Moore's work. It takes the action to a more populace-based climax, and while it's a different story than Moore's, it still worked for me. It felt true to the movie's more rabble-rousing feeling. 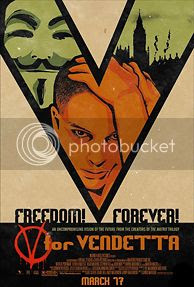 In general, the Wachowskis sand off some of the deeper edges of Moore's work, making it less internal. V is softened up a bit from the cool, vague visionary of the comics (whenever V starts to show emotion here, it feels tacked on). Many of the plotlines from the book are "Hollywooded" up. The bad guys are all very bad (John Hurt is seedy and demonic as England's future ruler), with few of the human touches Moore gave them, and V is a little too saintly for a mass murderer.

But still, this is a remarkably bold production for a major Hollywood movie. It's devious in that it combines kung-fu "Matrix"-esque action with some deeply progressive thought. Is it irresponsible, in that it lionizes a terrorist with little real debate about what that might mean? Yeah, a little. Having read and dissected the Moore novel – one of my favorites for years – many times, I came to "V for Vendetta" with a little more background than many viewers will. I do wonder if a 15-year-old kid watching it will come out with the wrong ideas. Is it just violence as agent of change, revolution tarted up and made mass-market? I'm still not quite sure.

But in a world where "Big Momma's House 2" and "The Hills Have Eyes" are hits, I'll take what I can get from "Vendetta." It's a vibrant vision.
Posted by Nik at 1:27 PM