‘Wallace & Gromit in The Curse of the Were-Rabbit’ 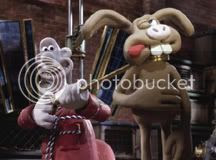 You know how kids love to fixate on things? Well, my 2-year-old Peter is addicted to “Wallace and Gromit.” The short films starring the lovable British clay animation characters are one of his favorite things in the world to watch.

Fortunately, we don’t mind watching them over and over either. The tales of fumbling inventor Wallace and his wry, ever-silent, smarter dog sidekick Gromit are hilarious, gentle humor, full of wit and creativity. Wallace comes up with “cracking” inventions, and Gromit helps get him out of the trouble that usually ensues as a result of them. In between, the pair eat a lot of cheese.

The three short movies from the 1990s each won an Academy Award, and now, their first full-length feature, “Curse of the Were-Rabbit,” has won the Oscar for Best Animated Feature.

We catch up with Wallace and Gromit and their successful new “pest control service,” that catches rabbits from people’s gardens and humanely gets rid of them. But when Wallace creates a new mechanical way to suppress rabbits’ desires for veggies, it ends up launching a terrible beast on the English countryside — the massive, carrot-snatching “Were-Rabbit.”

“Curse of the Were-Rabbit” boasts some impressively hectic action sequences, but still keeps its finger on the quirky little moments that make “Wallace and Gromit” so timeless. The bond between Wallace and Gromit is one of the great movie teams.

And boy, that claymation is fantastic. There’s something wonderful about knowing every single frame of this film was loving arranged by hand, as opposed to just typed into a hard drive. It took five years to make “Curse of the Were-Rabbit,” and it shows — detailed backgrounds, sight gags and incredibly ornate settings, such as an entire country fair or a field full of wiggling rabbits.

Obviously, in my household we’ll be watching this one again and again. But it’s such a funny, warm and inventive piece of entertainment, it’s worth seeing for everybody.
**** of four
Posted by Nik at 6:15 AM