LIFE: Read it in the papers

So in theory when we move here to New Zealand later this year, I'll have to get a job. I've been kind of avoiding that topic because there's so much else involved with becoming an expatriate that I've got to worry about, and I can't work anyway until I get residency, which will probably happen 3-4 months after we arrive for good. But the question remains, what will yours truly do? Unfortunately I'm not in one of these "highly skilled" professions there's a demand for here, i.e. medicine or computers. Journalism here is somewhat different than the U.S., although the basic similarities remain. But the newspapers definitely take a more British "tabloidy" tone with the news: 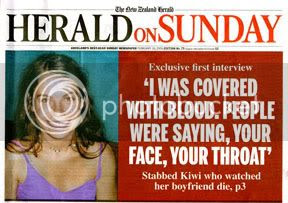 You'd have to read about halfway into this grim story to learn the stabbings occurred in Asia, not downtown Auckland. Not that that mediates their awfulness, but it does show a fundamentally different approach in coverage to our staid -- sometimes dull -- middle American approach. The NZ papers are closest in kin to New York City's fiery New York Post and other tabs, I think. It's an approach I wonder if I can fit in with, although I'm adaptable. 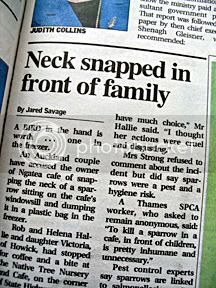 They definitely sensationalize a bit more here -- why have a traffic jam when you can have "Road Rage Chaos In Jam From Hell", as a headline a few weeks back said? Or take this gem from Sunday's paper, at right. Of course, the story is actually about a bird whose neck was snapped, traumatizing an entire family of kiwis: "An Auckland couple have accused the owner of Ngatea cafe of snapping the neck of a sparrow sitting on the cafe's windowsill and dumping it in a plastic bag in the freezer." Definitely unpleasant, but the headline kind of gives you a rather different impression than bird-icide, doesn't it?

There's also an excellent magazine industry here in Auckland that boasts several fine 'zines I wouldn't mind working for if the opportunity presented itself... Of course, for all I know, I won't be able to get a journalism job anyway, and end up doing magic tricks for nickels in front of a fish-and-chip shop.
Posted by Nik at 8:35 AM