When I lived in Mississippi, one of my favorite things was learning more about the blues … the down-dirty, Delta blues born and bred in Mississippi. During my time as an editor at the weekly newspaper Oxford Town in Oxford, Mississippi, from roughly 1994-1997, one of my tutors was Dick Waterman, a columnist for us with a powerful history in the blues.

Took me until a few months ago to find out that Dick has a book out. (So it goes when you move away from the South and don't keep in touch like you should.) But when I learned about his 2003 book "Between Midnight And Day: The Last Unpublished Blues Archive," I rushed to find a copy.

Dick was a columnist for Oxford Town before I got there, and continued for a year or two after I left. He'd write about whatever struck his mind, many weeks, but a recurring theme was his days as a manager and promoter of blues musicians. He helped "rediscover" many of the great artists in the 1960s, such as Son House and Booker White, and also managed Bonnie Raitt for 15 years. I didn't really figure out for a good long while that Dick was at the center of a ton of great music, but in hindsight the man was like the Zelig of the '60s blues scene, everywhere, not always heralded, but quite pivotal. And he was also one hell of a photographer on the side. 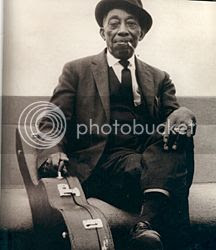 Dick's photos were often included with his music columns, and I don't think at the time I realized just how priceless a resource they were of a rapidly vanishing age of music. As the old folks die off, few other than B.B. King are around to evoke that classic Mississippi Delta blues. But Dick knew them all, and his archives were filled with candid, remarkable shots of blues legends like Skip James, Junior Wells, Otis Rush, John Hurt, Arthur Crudup, as well as '60s rock legends like Jagger, Joplin, Clapton and more. One of my personal favorites is this one of Mississippi John Hurt, sitting in a station somewhere with his guitar, looking old as the hills. 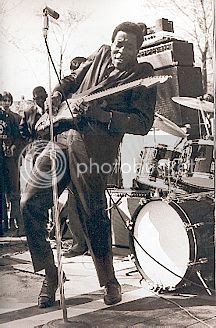 Dick's photo albums are the record of an age, when blues met rock and forever influenced it. Yet the photos were kind of forgotten down there in Oxford, Mississippi, where we'd use them as art to spruce up our tiny alt-weekly. Crisp and sharp black-and-white, they showed Dick Waterman's eye for the moment. Have to admit, we kind of took 'em for granted (I did get to borrow a really fine image of B.B. King by Dick for one of our "Oxford Town" t-shirts, though).

It took their chance discovery by Chris Murray for folks to realize what a priceless music gold mine Dick's photos and stories are, and "Between Midnight And Day" was the result, along with a nice show up in Washington, D.C. Elegantly designed and presented, "Between Midnight And Day" is a fantastic keepsake of Dick's life and times, working both as portfolio and genial autobiography. Dozens of his photos are reprinted, broken down by personalities, and each photo feature includes a short essay by Dick reminiscing. Some are sad – the tale of ripped-off Willie Shade – some are awe-struck — the frightening Howling Wolf – while many are just observational, acute little portraits. Dick's Web site features an excellent selection of his photos to look over (the only shame is you can't see them at full size).

Dick never really felt like he was bragging in his writing; it was more that he was just telling stories. Sure, they'd feature appearances from everyone from Muddy Waters to Son House, and when he was talking about "Bonnie" it was Bonnie Raitt. I actually learned a nice bit about column-writing from Dick's easygoing, conversational style. It was great to see some of his gems, such as the tale of humble Arthur Crudup, re-worked into essays for this book. There's at least another book's worth of his columns to be had. (Dick apparently also has another book he's contributed to that just came out last fall which I haven't seen yet — "The B. B. King Treasures : Photos, Mementos & Music from B. B. King's Collection" —timed for B.B.'s 80th birthday.)

Dick, admittedly, was eccentric, a real character to deal with when I was his editor. In the pre-email days he'd fax his columns in to Oxford Town, often at the last possible minute, sometimes right around midnight when we were going to press a few hours later. Yet he was always friendly to deal with, and sometimes he'd even come in the office to hand-deliver the column in the middle of the night. I always looked forward to reading his latest, and was sorry to learn he gave it up eventually after I moved on myself. But with "Between Midnight and Day," he's given everyone a fine token of his life and times in the music scene. As legacies go, this is a pretty great one to have.
Posted by Nik at 4:05 AM