TV: A moment of silence 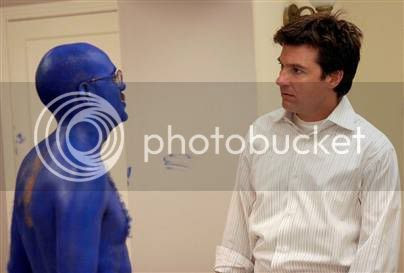 I come back from Portland* and there's sadness in the land. Well, it was bound to happen. TV's funniest, most surreal and sprawling comedy, "Arrested Development," appears to be officially kaput. There's a slight chance it may resurface on cable, but I'm not holding my breath. Can't blame Fox, either, as they did give it 2 1/2 years in the face of immense public apathy. Sigh. At least we've got our DVDs to keep us warm at night -- this show is one that definitely benefits from repeat viewings for the layered in-jokes, sight gags and twisting plot. There'll be a few more episodes in December, it looks like, and then "AD" will shuffle off into the graveyard of critically adored, underappreciated TV. (*cough * cough* "Firefly.")

It was just a bit too smart for the American public, I guess, who chose to watch "America's Top Model" and "C.S.I." instead. I could unleash a torrent of bile over a world where people think driving yellow Hummers are cool, that re-elects Bush and moviegoers actually pay to see something called "Saw II," but hey, Will Pfeifer already did it for me. If anybody wants me, I'll be in my room.

*Portland trip report coming soon!
Posted by Nik at 6:47 AM