LIFE: The Way of the Weaning 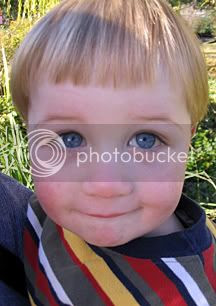 Could you refuse this face?

So, we've finally taken the last dramatic steps toward leaving babyhood behind. Toddler Peter has been mostly weaned for a few months now, only doing a brief nighttime feeding, but faithful wife Avril and I decided it was time to go "cold turkey" and adjust the lad to life without the breast. At 21 1/2 months old, he's been doing it for a while, but heck, he's an extremely healthy, happy boy who's a lot bigger than most other kids his age, so breast-feeding clearly has agreed with him. But everything has to end eventually... It's time to get hardcore.

Last night was the first "nurse-free" one, and apparently it went really well (I had to work early, so Avril got to stay up and soothe the boy till 10:30 or so). No crying or hollering at all. It ain't over yet, and we'll see how Night 2 goes tonight, but we're doing better than we feared. The keys seem to be distraction and keep stuffing him with food. Truth be told, Peter is probably ready for this even if he doesn't quite know it. It'll be at least a week before it sticks, and we'll have to hear his plaintive little inquiries of "nur... nur?" (nurse) for a little while yet, though. Brave wife deserves 99.9% of the credit for easing him through this change. I, however, do give very good horsey rides.

I'm already getting sad at the idea my mini-me boy won't be a baby forever. He's running, talking and coming up with new words all the time ("helicopter," "digger" and compound sentences are his latest feats). Toilet training lurks on the horizon, which will definitely be a highlight of 2006. He'll start preschool in 2007. Then before you know it he'll be stealing the keys to my car. We're pretty sure we're a one-child family, but you can see how quickly the urge to make another perfect li'l critter just like the one you've got can sneak up on you...
Posted by Nik at 9:42 AM