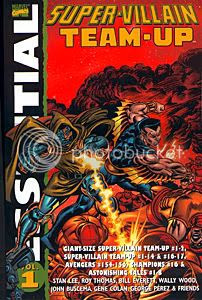 Man, "Essential Super-Villian Team-Up" Vol. 1 (and, um, only) is a giddy goofball blast of a comic. Collecting the entirety of the late, not particularly long-lived '70s series "Super-Villain Team-Up" and some bonuses besides, it's that rarity among comics — one featuring a villain as its protagonist. And who better than Dr. Doom, that armor-clad monarch who, arguably, is the best comics villain of all time?
OK, "Super-Villain Team-Up" is no flawless comic book classic — the art ranges from greats like Wally Wood and George Perez to some real mediocrities, and the stories roam all over the place (the final two issues here, a team-up between the Red Skull and, er, Adolf Hitler that doesn't include Doom, may be one of the worst comics I've ever read). Yet the majority of them are good fun. I always get a guilty pleasure out of rooting for the bad guy, and the magnetic, egotistical Dr. Doom is the baddest of the bad. For $16 and change for 500+ pages, it's all comics goodness.

Anyway, one thing I learned during this volume, which follows Doom's various unsuccessful attempts to take over the world, is how important good smack talk is for a would-be dictator. Doom gets on the wrong side of pretty much everyone in this book, from Sub-Mariner to the Red Skull to the Avengers to Magneto. And he's not a man who's shy about his feelings when irked. Thus, some of Dr. Doom's choice put-downs for your entertainment. Feel free to use any of these in your day-to-day squabbles.

• "I'll teach you to affront the master of menace!"

• "I am Victor Von Doom -- and I was born to RULE! Merely to SPEAK to me of surrender -- is to sign one's DEATH WARRANT!"

• "Fly, you ungrateful water-snipe!" (to the Sub-Mariner, who gets called a 'water-snipe' [what the hell?] at least twice.) 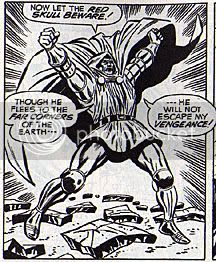 • "You think to crush Doom with STONE, my erstwhile ally? Know you NOT that Doom has made mountains TREMBLE?"

• "My hounds lust for the taste of their warm, wolfish BLOOD!"

"…And now we will learn if an android can DIE." (to the intrepid Vision)

• "Doom will live to see you UNCREATED!" (also to the intrepid Vision)

• "Like ALL men -- you marvel at the LEAST of my genius -- and I find your grudging praise LAUGHABLE."

• "Gloat while you CAN, you fleshless, crimson CUR!" (to the Red Skull, who manages to really get under Doom's skin and gets the crap beaten out of him on the moon of all places as a result) 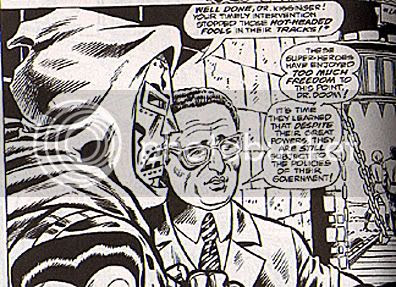 Special bonus: Doom collaborates with that avatar of all evil, Dr. Henry Kissinger! (You can't make this stuff up, honest.)
Posted by Nik at 4:55 AM