MUSIC: Everything you ever wanted to know
about David Bowie's "Low" but were afraid to ask

"Writing about music is like dancing about architecture," Elvis Costello famously once said, but heck, even if it's chasing ghosts, I love reading solid rock criticism. Done well, a writer can give you a new view of an old tune, or turn you on to something you've never heard before.

The 33 1/3 series by Continuum Books takes music writing and distills it down to its essence. They're short chapbooks devoted to analyzing the story of a single great album, through history, interviews, essays or even fiction. They're tiny, just under 5 x 7 inches and about 125 pages each volume, and they're oh so darned cute. The series so far has tackled everything from Springsteen to the Velvet Underground to Joy Division to DJ Shadow to The Beatles. The series' free-form nature can sometimes lead to indulgent intellectual meandering, but most of the books I've read so far have been tight, informative and insightful. (A complete list, including some future titles and proposed ones, can be found right here) 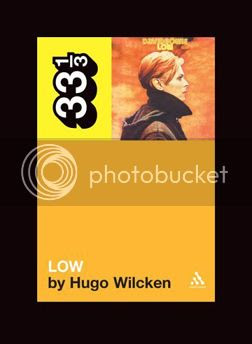 Anyway, up in Portland last weekend I picked up one of the newest 33 1/3 volumes, a look at David Bowie's "Low" by writer Hugo Wilcken. Soon as I saw that "Low" was now part of this series, I didn't hesitate to grab that puppy off the shelf. Readers of this blog know I'm a big-time Bowiephile, and "Low," Bowie's 1977 landmark, is right near the top of my favorite Bowie albums. In its glacial cool and soulful angst, "Low" never gets old to me. Recorded just shy of 30 years ago, it's still futuristic and strange, combining dreamlike pop with machine-like instrumentals, punk flavors, ambient drift and hypnotic rhythms, and sparse lyrics following the drifting of a lost soul. Perhaps the best quote I've ever read about "Low" comes from Bowie himself in Wilcken's book — it captures "a sense of yearning for a future that we all knew would never come to pass."

In the "Low" volume, Wilcken does a very solid job of establishing the context from which "Low" sprung — Bowie's drug-addled, near-catatonic mental state at the outset of recording, his family history of mental illness, collaborators like Brian Eno and Tony Visconti, Kraftwerk and other angular music that influenced him, the artistic scene of mid-70s Berlin, and all the other little pieces that created this unusual album. Bowie, the noted chameleon, strips away his masks throughout "Low," and the album shows the deterioration of language as a medium of communication. Only about half the songs even have lyrics, although they're among Bowie's strongest — the bouncy "Sound And Vision," yearning "Be My Wife," world-weary "Always Crashing The Same Car" — but words fade and the entire second side is instrumental. By the great "Warszawa," Bowie has crumbled into an imaginary language that predicts the music of a modern band like Sigür Rös by decades.

"Low" is one of those rare records that's only grown in power and reputation over the decades. A world used to Ziggy Stardust and the Thin White Duke didn't know what to make of this crystalline, lonesome Bowie sound. (Wilcken uses the word "autistic" to frequently describe Bowie's behavior in this disc, which may sound inappropriate but really sums up the transformation of the Bowie character during the song cycle.) Wilcken's "Low" meets the magic benchmark of music criticism for me — it gives me new appreciation for an album I already deeply loved. If you're a fan of enterprising, long-form music criticism, these 33 1/3 books are well worth a shot. Pick one about an album you dig and give it a spin.
Posted by Nik at 5:00 AM