...So you might notice the new little link button right over there -- yes, that one. I've joined the secretive cabal that's really running the Internet, BlogCritics! It's a nifty site that combines the efforts of more than a thousand different bloggers on pop culture topics from all over the spectrum, and I'm pleased they've let me join their evil conspiracy. Seriously, though, it's a swell site, a kind of "best of" the critical net voices out there, and you'll be able to find my writing there hopefully a couple times a week. You can head over right now and read my cheaply reposted piece from this site on "Low" by Hugo Wilcken. Go browse, I can wait.

Anyway, for those who stuck around, let's get back to my post for today....

COMICS: Cruisin' with 'The King'

The good folks at Top Shelf have sent yours truly some fine comix lately to read which I'll be reviewing on here periodically. When I got their box of comics, the first one that jumped out at me was Rich Koslowski's "The King." I mean, c'mon -- Elvis! In a fearsome gold mask! I'm in. As I mentioned mere days ago in a footnote, I only recently really developed an appreciation for that Presley kid's impact on music history. 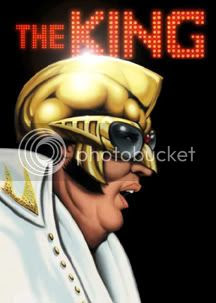 Now along comes Rich Koslowski (creator of "The 3 Geeks" among others), who's crafted a graphic novel that's both a cunning tribute to Elvis and an insightful dissection of what our idols really mean to us. Elvis has returned, you see, or someone claiming to be him, a top-notch impersonator who wears a golden helmet and has all the King's moves down pat. From his home base in Vegas, "The King" is drawing fans and a growing cult of obsessions. He claims to be the real Elvis –- and that he's even become a kind of god, resurrected to do his work again. Paul Erfurt, a disgraced tabloid journalist desperate to make the big time, is sent to Vegas to find out the truth about Elvis. He doesn't have a clue what he's getting into. 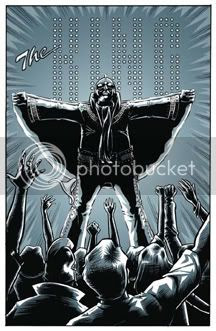 There's a real air of soulful enigma to "The King" that I liked. Koslowski doesn't go in for easy jokes about Elvis, nor does he stoop to fanboy worship. He's hunting for answers about what Elvis means to the people who're following him -- and to himself. Erfurt interviews many people trying to get to the truth -- spurned lovers, acolytes, bodyguards and people who might know who this new Elvis really is -- but in the end answers are all subjective. "The King" is a kind of existential pop culture romp, "Twin Peaks" meets "Jailhouse Rock" -- a bit of drama, bit of action, bit of introspection and a fair amount of wry humor. Koslowski's art is crisp and clean, with a cartoony edge that emphasizes the characters' emotions. Black and white with nice use of duotone shading, it's a gorgeous little book, with Top Shelf's typically eye-catching design sense. If you're a fan of Elvis -- or just a fan of explorations of fame in general -- "The King" is worth seeking out. $19.95, 250 pages, available at Top Shelf or finer comic stores everywhere.

...No posting for the next few days, as we're getting ready for my folks to roll into town tonight and all that Turkey Day goodness. Hope you and yours have a fine holiday full of stuffing and no bad cranberries.
Posted by Nik at 4:07 AM