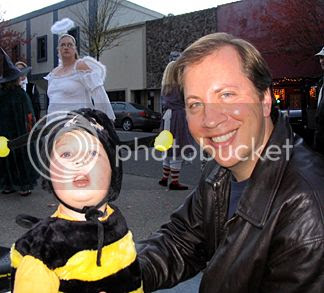 Bee boy and Dad. No 'what a scary costume' cracks about yours truly, please, I'm fragile. Bee boy eats chocolate! He chewed and chewed on the wrapper until he had reduced the candy into some kind of liquid, then sucked some of it out.

They have this fun "Neewollah" (spell it backwards) parade here every Halloween that's nice, they close off downtown and all the kids and parents march from one end to the other, then they go back and get candy from the merchants. Peter loved being able to run freely through the streets and even ate part of some candy. Mom and Dad get the rest.

It's a bummer though that trick-or-treating seems to have vanished mostly. Even in neighborhoods where you'd think there'd be some, there isn't. We only stopped at one house on the walk back from the parade and mainly because I wanted to see it because it's an old Victorian. The rest appeared boarded up or you weren't quite sure if they were trick-or-treating or not and didn't want to chance it (little is more embarrassing than going to a house and finding some sleepy-eyed dude in his underwear coming to the door). Shame, I guess it's sensible because of all the sad wackos out there now, but man, I had some great memories of being a kid and trick-or-treating all around our neighborhood. My personal highlight was the year I was a mummy, dressed in yellow pajamas and wrapped up in toilet paper which unraveled by the third block.