Johnny Cash walked the line between Satan and salvation much of his life.

Growing up dirt-poor in Arkansas with a bitter, drunken father, and suffering the early loss of a beloved older brother in a hideous accident, Cash knew pain — and transformed that hurt into a passel of fantastic tunes, becoming an early rock ’n’ roller, a country music icon and one of the few musicians cool to just about everyone. 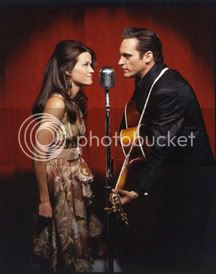 He struggled with drug addiction for years, and long-unrequited love for a fellow singer. He raised a lot of hell — yet he was also a committed Christian.
He’s one of the few musicians to end up in the Rock and Roll Hall of Fame and the Country Music Hall of Fame, and he had hits stretching from the 1950s right on up to months before his death in 2003.

Johnny Cash’s epic American life was made for a movie, and “Walk The Line” delivers, thanks to remarkable performances from Joaquin Phoenix as Johnny Cash and Reese Witherspoon as his future wife, June Carter.

It’s mostly a rousing joy, although director James Mangold bogs down a little too much in the drug abuse and darkness of Cash’s life. The potent romantic chemistry and soaring music performances give “Walk The Line” its real kick.

The musical numbers crackle with an electric tension, particularly when Phoenix and Witherspoon duet. Believe it or not, these two actually sang every note themselves. Phoenix really manages to evoke the spirit of Cash’s deep drawling majesty, echoing Cash without just imitating him. It’s a smart move — merely lip-synching Cash’s tunes would not have had the same weight onscreen.

The story follows the first 40 years or so of Cash’s life. Trying to support his wife Vivian and children as a young man — a marvelous bit shows the travails of “John Cash, door-to-door salesman” — Cash flounders, knowing that he wants to play his music, but unsure how to achieve it.

In an audition before pioneering Memphis record producer Sam Phillips, we watch Cash feel his way through a halting performance of “Folsom Prison Blues,” discovering his signature sound right before our eyes (“steady like a train, sharp like a razor,” June Carter calls it).

These early scenes capture the musical camaraderie and shaping of young Cash’s image. Future legends like Elvis Presley, Jerry Lee Lewis and Cash cram into cars and drive from show to show in small Southern towns.

On the tour, Cash meets June Carter, part of a legendary country singing family. They become friends, and then more — but Cash and Carter are both married unhappily to other people, and Carter turns down Cash’s constant flirtations. For more than a decade, the two fight their attraction, and Cash dulls his heartache with a steady diet of amphetamines, slowly killing himself even as he becomes world-famous.

Phoenix, best known for supporting roles in “Gladiator” and “Signs,” takes on the tough task of portraying a beloved pop culture figure and pulls it off. He gets Cash’s self-destructive edge and the hole left in his soul by his brother’s death and the casual cruelty of his father (played by a fierce Robert Patrick). We watch a hopeful young singer turn into the dark, dramatic Johnny Cash who would change music.

And as the tough, spirited June, who becomes Cash’s obsession and lifesaver, Witherspoon gives an amazing performance, light years from the frothy comedy of “Legally Blonde.” It’s her first truly “adult” role, and a fine showcase of her versatility.

Johnny Cash’s life was too big for one movie to hold, and there’s a lot “Walk The Line” misses or fudges a bit for dramatic purposes (one particularly emotional onstage scene at the climax didn’t happen like that in real life). The basic structure here comes perilously close to biographical cliché — rags to riches to rags to riches again — but Phoenix and Witherspoon’s powerhouse acting sells it.

The fiery romance of Johnny Cash and June Carter was one part of their legend, and “Walk The Line” makes you feel that burning passion all over again. Look for it to win some Oscar gold next year.
Posted by Nik at 5:08 AM