This week in an assortment of random things... 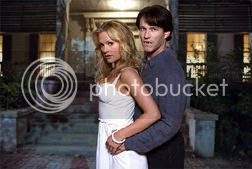 This week in television shows: We've finally gotten the HBO TV series "True Blood" on the air down here, starring New Zealand's very own Oscar-winning Anna Paquin, whom I must say has, er, filled out since "The Piano." I've only seen two episodes so far but I rather dig this new spin on the vampire mythology by "Six Feet Under" creator Alan Ball. Brief synopsis: thanks to the invention of a "blood substitute" drink, vamps have come out of the closet and are trying to integrate into human society, and "True Blood" focuses on one small Louisiana town's reaction to the vampires in their midst. Paquin is quite good, doing a decent Southern accent, and I like the way the very adults-only show straddles bloody Gothic camp and psychological depth. The satire of other minority movements is great ("God hates fangs" reads one sign). It really captures the relaxed, sultry yet tense feeling of the American South without descending into caricature. (The South is frequently larger than life, and "True Blood" is honest there.)

This week in upcoming cool music: Did I mention back when I saw them in January with Neil Finn that it turns out Wilco has recorded much of their upcoming new album down here in New Zealand? Actually just up the beach not too far from where the family bach is. I'm eager to hear how the land of the long white cloud has influenced Chicago's finest. One of my favorite bands and one of my favorite places = better than peanut butter and chocolate. Come on, June!

This week in music I've never heard before: I finally got around to checking out some of the famous Captain Beefheart, and good god the man is like Tom Waits' alcoholic eccentric older uncle or something. Madness but kind of compelling as well in a clattering fashion. Good for those 4.30am drives into work when my head is not awake yet. Urg.

This week in sad media cutbacks: Blender magazine folded, and with it went my last remaining US magazine subscription (I had a really good deal and did like a 5-year renewal long before we emigrated). But the magazine had really fallen off from its peak several years back, getting increasingly slim and trashy. At one point, though, it was quite a good music magazine with a nice cross-section of coverage (you might find Jay-Z, Metallica, T. Rex and Pavement all in the same issue), some snarky yet intelligent articles and some nice reviews. It was trying to be a kind of US answer to far superior UK mags like Q, Mojo and Uncut I think. But as sales slipped they tried to sex it up and dumb it down and so they died. The last year or so featured an increasing amount of near-naked non-talents on the cover, so I can't say I'll miss it as it is now, but it's a shame few US magazines can break the dull Rolling Stone/Spin monopoly of coverage.

This week in media voices who actually have something to say: I rather like Time magazine's Joe Klein, who perfectly captures the one-crisis-after-another-hysteria "Americans are outraged" meme of the week: "If you want to be angry about something, get pissed at a media culture that goes berserk about bonuses one week and forgets all about them the next." A whole bunch of journalists repeating something over and over doesn't always make it true. Another nice piece of sane perspective against hyperbole comes from NZ Herald writer Paul Thomas. Now, if you want true "outrage," go see how politics are typically conducted in places like Zimbabwe, Thailand or East Timor. The gap in the journo-sphere's perspective-less view of the Obama administration (he's up! he's down! he's all around!) contrasts mightily with the view of most average Americans I know whose ability to parse a thought can actually extend beyond one news cycle. Or as Obama put it himself, "One day I'm a genius, one day I'm a bum." A presidency is not made in weeks.

This week in frustration: Still nearly two weeks till my holiday from work.
Posted by Nik at 4:54 PM