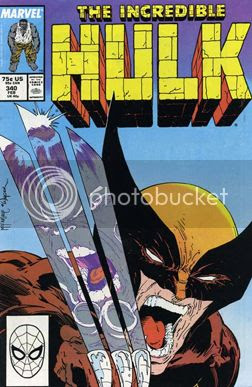 OK, I've gone highbrow with some parts of this series, but forget your "Cerebus" and your "Eightballs" as we continue an alphabetical gallop through my comics collection. This is straight-up jaw-trembling muscle-straining sinew-bursting superhero action, effendi! Or in other words -- HULK SMASH!

"Incredible Hulk" #340 boasts one of the most iconic covers of the past few decades, and a delicious Hulk vs. Wolverine battle that is still probably the best clash these two have had. Wolverine is so overexposed as a character that good stories are rare, but this one does a nice job of showing Wolverine trying to "mature" (he actually declines to brawl with the Hulk at first). It ain't Shakespeare, but for hero-on-hero action it's a decent read. But this comic also feels so 90s, even though it came out in 1988. A lot of that is due to the art of Todd McFarlane.

I never was a huge fan of the whole "Image comics" school of art, but of them McFarlane was probably the best. His work seemed a bit of fresh air at the end of the '80s, a sharp contrast to more conservative draftsmen like Herb Trimpe or Dave Cockrum. McFarlane specialized in sharp angles, peculiar lines and dynamic tension; I never really got into his absurdly pretentious "Spawn," but his work on Hulk and Spider-Man at the time had a trashy power that still holds up. I particularly liked how ugly he made the Hulk, all gnarled muscles and bubbling anger. He captured the Jekyll and Hyde essence of the character better than many artists. His "pretty" characters, by contrast, looked like eerie Barbie dolls.

But the McFarlane art is only part of what made "Hulk" #340 such a solid superhero-vs.-superhero romp. Peter David was just starting off his record 12-year run on the character, and he had a ball playing with the basic concepts of the Hulk - in his run we had gray Hulk, smart Hulk, crazy Hulk, a variety of personality takes on Dr. Banner and his alter ego. David's mix of humour and psychological angst worked well on the Hulk, and I still treasure his run as the best the character's ever had. In this issue you feel him start to unfurl his wings and try some new ideas out. He ran out of steam towards the end, but for most of the duration he made the Hulk truly exciting -- something the childlike green giant the Hulk had been for many years wasn't. Writers since have tried to capture David's invention with mixed results. ("Red Hulk"? Please.) When I think of the Hulk, I think of Peter David's definitive work on him.