Battlestar Galactica: Then and Now 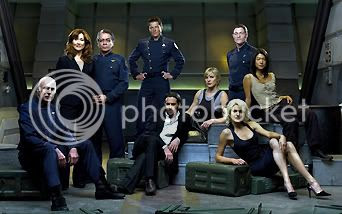 So I've been on a mad binge lately. It's not the vodka, pills or the crack, but the Battlestar. "Battlestar Galactica," that is.

After meaning to get around to watching the modern "reinvention" of the kinda goofy '70s sci-fi show for a few years now, we finally dug in and did it. And yeah, as with most things I discover long after the fact, I can't believe I waited so long to see it -- we didn't have the cable station it was on when we lived in the US, and kinda like "Buffy The Vampire Slayer," after a while it all seemed rather daunting to take on. In a way, though, it's great to wait until several seasons of the show are out on DVD and have a binge.

But boy, what a great TV series this is -- we've torn through Series 1 and 2 on DVD and are just starting Series 3, while simultaneously watching Series 4 as it airs on TV down here. We dream of Cylons.

I'd been toying with some sweeping, massively impressive and insightful blog take on "Battlestar Galactica" for a couple weeks now, but the thing is there's so danged much talk out there already that I don't know if I have a lot new to add. 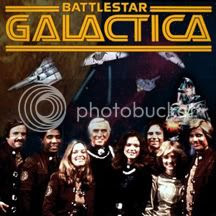 But one of the things that had stalled me from checking out the reimagined "Galactica" is that I was actually quite a big childhood fan of the original series, even if I know in my heart of hearts it wasn't actually all that good. Still, there was a spunky, cowboyish charm to the tales of Starbuck, Apollo and Adama back in the disco era, and when you're 8 or 9 years old you don't care about the rather wooden acting, cheap, recycled special effects (how many times did they reuse the Viper flight sequences?) and silly plots. The basic idea of "Galactica" was quite interesting, and the Cylons, firefighter boots and all, were spooky-cool villains. I didn't know if I wanted to see a grim and gritty new series reinvent the wheel. But even at age 9, I could see a lot of wasted potential in the old "Battlestar Galactica" -- the only episode I really remember as special was the bizarre "Galactica 80" one where Starbuck and a Cylon end up shipwrecked and become bestest buddies.

In contrast, the new "Galactica" fully embraces the germ of a good idea at the concept of the series and explores it in fascinating new ways. Mankind nearly wiped out by the mechanical Cylons, on the run and searching for the mythical planet "Earth" -- check. 1970s "Galactica" pretty much used that plot as an excuse for frothy sub-"Star Wars" adventures. 2000s "Galactica" grabs at the cold horror of mass extinction and doesn't flinch.

Just a few of the things I, as a '70s "Galactica" fanboy, appreciate about the new series to date:

* The conflict between a military force and a civilian government in times of war is grist for great material. There's a lot of subtle (and some not subtle) takes on the "War on Terror" and the Bush administration in the ways we see the cold calculus a struggling mankind applies in dealing with an implacable foe. Moral dilemmas are commonplace and rarely neatly sewed up.

• The Cylons are far more interesting than the robot army of the original series, with their humanoid mimicking, creepy mythology and endless conspiracies they generate. "Galactica" questions what it is to be human, what our identity really means, and how we ever know who we really are.

• Space as a setting in the series is grey, mechanical and seemingly devoid of any non-human or Cylon life. The ships are creaky, full of old-fashioned walkie-talkie communicators, munitions instead of lasers and none of the "Star Trek" trappings we associate with science fiction. It's a lived-in reality that reminds me a bit of how Joss Whedon's great "Firefly" series portrayed space. 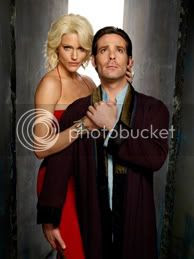 • The acting is uniformly superior, with the excellent Edward James Olmos as Admiral Adama, Mary McDonnell as President Roslin and Katee Sackhoff as the female version of Starbuck. But the best is the wonderful James Callis as Dr. Gaius Baltar, a character who was a rather one-note sniveling traitor in the original series but who has been rethought as the series' conscience, villain and failed hero all in one. Baltar's weaknesses, machinations and occasional moments of heroism make for a great character, and Callis is superb at reflecting his self-loathing and greed. And how cool is it to see Richard Hatch, Apollo of the old series, as the scheming Tom Zarek?

"Battlestar Galactica" is a bleak, often staggeringly dark series (there are some episodes so unrelenting it's hard to get through), but exceedingly well done for all that. I can't wait to finish Series 3 and 4 and see where the tale ends up, and I imagine I'll have more to say along the way.
Posted by Nik at 9:18 PM