Death and dying in the newspaper industry 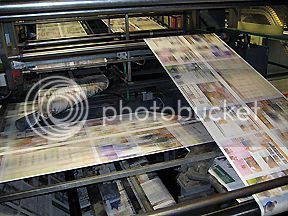 ...Another day, another slew of terrible news for the newspaper industry. The Seattle P-I joins the Rocky Mountain News in the papers who are no more pile, and according to a lot of folks, it's just getting started. The tipping point has been reached and it's all downhill from here.

The new 2009 report on the State of the News Media by Pew Research Centre's Project for Excellence in Journalism doesn't mince words: the first sentence is, "Some of the numbers are chilling."

Pretty much every journalist I know back in the US has been hit by this -- I know a half-dozen former co-workers who've been made redundant, or had to face salary cuts just to stay afloat. These are good folks who don't deserve this. NZ's journalism scene isn't faring a lot better, but it's smaller and more compact. You'll see newspapers morphing to the web model like the P-I, which is workable if done well (and an importance is put on solid, in-depth reporting as well as the breaking-news-by-the-second that websites excel at). A lot of small, crochety papers that are still debating whether to cut "Dear Abby" to four days a week will die. A lot of journalists will enter new careers. I am hopeful of my own job security in the industry, for now, but have to admit I'm uncertain too if journalism is where I'll be in 10, or even five years.

I've written before on the industry collapse (I don't think "slump" is quite the right word anymore) -- and I've said that I don't think newspapers are dying. But they are radically changing, rearranging and some of it is quite messy. And the human cost is enormous -- the industry lost at least 10 percent of newsroom jobs last year, and the toll is likely to just keep getting higher. One of the previous papers I worked at had 3 very talented full-time photographers. It now has one. It's a vicious circle; you cut staff to contain costs, quality plummets, and less people read the paper so you cut more staff. Until, like many a paper now faces, you close your doors. Two-newspaper towns are now a rarity in the US; it's a matter of time until some are no-newspaper towns.

News-gathering as a profession isn't going anywhere, but I do mourn the traditions of the past -- newspapering is a terribly romantic business in my mind, despite the often boring nitty-gritty of reality. I think of Cary Grant and "His Girl Friday," of HL Mencken and Herb Caen and Lewis Grizzard tapping out columns, of long days and nights and the rewarding roar of the press at the end of it all. Something of that is being lost.
Posted by Nik at 6:01 PM