Excuse me while I put on my cynic's hat. I like to think of myself as fairly environmentally minded. But I found this whole Earth Hour thing this past weekend to be a cheesy bit of feel-good symbolic environmentalism, a big empty gesture that doesn't exact much in the way of change. Shut off or reduce your power for an hour, they said. But why turn off your lights for an hour and tell yourself you're clean and green if you don't do much in the way of changing your habits the other 364 days of the year? New Zealand's energy consumption went down 3% for Earth Hour; but how much would it go down if people didn't just pat themselves on the back with one hour and instead did things like buy energy-efficient bulbs, turn them off when you're not in a room and the like? 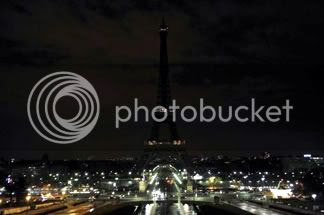 The intention behind Earth Hour is wonderful, I know, and it's geared toward getting people to think about a new global climate deal, but I guess I tend to find it very vapid cheerleading that doesn't really lead to much in the way of action, allowing people to think they've made a difference and then go on as before. I guess as I get older and more cynical I find less appeal in these gestures, but then again, maybe I'm just a cranky git and it will make some people change their habits. But I have to wonder, are people really going to turn off the Eiffel Tower and Las Vegas lights every Saturday now?

On the other hand, one movement that is gaining steam in New Zealand does have a lot going for it -- charging people for plastic bags at stores. Chains like Borders and the Warehouse (our big Kmart sort of chain) are now charging customers an extra 10¢ if they want a bag for their purchase. I like it - it makes you think twice. If you're just buying a single book, you don't really need a bag, for instance. Borders reports bags have cut down by 80 percent after they introduced the levy. Yeah, sometimes you need a bag, but most times you don't. We recycle our plastic bags we do have for trash and so forth, but probably could do without a great many of them. If you hit people in their wallet, they have to reconsider habits a bit. Considering how many zillions of bags clog the planet right now, movements to reduce or even ban useless bags are change I can get behind. (Has this gotten anywhere in the US at all? Apparently in California it's actually illegal to charge for bags!)

I'm not wanting to be smug as I'm nowhere near a "perfect" environmentalist; sure, we compost, grow some of our own vegetables, recycle most of our trash, never buy Starbucks or fast food really, only have one car between us, don't eat much red meat (my wife's a vegetarian). But we use electricity, our cranky old Subaru smells funny, I do have a nasty habit of driving to work when I could walk (it's the 6.30am bloody start time darn it) and do love the smell of Pledge furniture polish. It's good to see people thinking more and more about the future now, but that ever-rising cynic in me still keeps worrying it's about 20 years too late.
Posted by Nik at 5:14 PM

Email ThisBlogThis!Share to TwitterShare to FacebookShare to Pinterest
Labels: environment