No obligation! 12 cassettes for ONE CENT!! 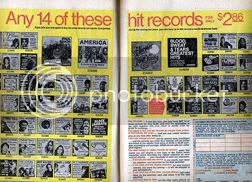 Buy one, get 12 free! Mail-order record clubs were how I discovered a heck of a lot of music back in the 1980s and 1990s, pre-download, pre-My Space page era.... sadly, though, they're dying out. BMG Music service, the last remaining big one, is closing up shop in June. Columbia House, the other big music outfit, had shut down a couple years back.

I know it's kind of weird to mourn the demise of a scheme that screams "corporate rock," but hey, although it's been several years since I was part of a mail-order music club, they were great at the time. My first memory of joining one of 'em was back circa 1984 or so, when as an impetuous teen I dove into the waters of a cassette club. 12 tapes for the price of 2? My god! My very first order, I vaguely recall, introduced me to cutting edge acts like Madonna, Chicago's "17," Huey Lewis's "Sports," Men At Work's "Cargo," and Van Halen's "1984" (which I recall I really didn't like).

That's how I ended up owning stuff like Rockwell's "Captured." Because you usually found about half-a-dozen tapes you really wanted, and then sort of took a chance on others. Sometimes it didn't quite pay off. Sometimes it did -- I got Richard and Linda Thompson's "Shoot Out The Lights" on a whim having vaguely heard of it, and it's become one of my favorite albums of all time. The time I spent studying the fine print in the catalogues looking for something that seemed cool added up to days, probably.

Like most obsessive music fans I gamed the system, "joining" and "quitting" the clubs several times over the years to get the whole 12-tapes-or-discs-now deal over and over again. If you did the math you might realize you weren't actually saving much money at all in the long run (something like $3 shipping per CD in the days of 25¢ stamps added up), but you didn't care. Music in the mail! When my hometown had one fairly pathetic record shop in it, the packages from Columbia House/BMG and the like seemed like dispatches from the outside world.

Sure, the "must reply or you'll get this unwanted MC Hammer CD" cards were annoying, but hey, I got a lot of my music collection from these clubs. Even the CDs you got in error (by failing to send back the card in time) could sometimes pay off -- that's how I first heard The Pixies and "Dolittle." The clubs were fairly dodgy affairs -- mysterious extra charges, ignored mail messages, selection omissions (nobody ever had the Beatles!), lousy customer service -- but the function they filled, well, it meant a lot back in the day if you wanted to find out about Neil Young, Depeche Mode and David Bowie and didn't have a record store in town. Ah, the kids these days, they'll never know what it was like to get 12 CDs for a dollar.
Posted by Nik at 1:07 PM