"It is not the mountains that we conquer, but ourselves." - Sir Edmund Hillary 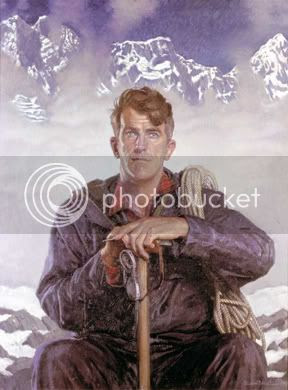 New Zealand's biggest mountain crumbled today. Sir Edmund Hillary was the most famous New Zealander in the world, the first man to climb Mount Everest, a world-class explorer and gentleman and as almost any kiwi will tell you, "a first-class bloke." He was 88 years old, but still, it kind of seemed like he'd live forever. Besides climbing Everest with Tenzing Norgay, Hillary also traveled to the North and South Poles. His last trip to Antarctica was last year - at 87 years old.

While the world mourns him, in New Zealand, Hillary was an absolute icon. Hillary's place in NZ society is pretty unique -- when his death was announced today, a spontaneous gasp erupted among the hardened, cynical newsroom. He was above politics, a national hero of a kind I'm hard-pressed to compare to in America. He's on the five-dollar bill, for crying out loud. A state funeral is pending, of course.

The thing about Hillary is his essential kiwi nature - self-effacing yet not insecure, proud yet not too boastful. In him, we all -- native New Zealanders and newcomers alike -- we saw what we wanted to be. He was that rare fellow few people could say anything bad about -- more than 50 pages of memorials to him from all over the world to him right now on the NZ Herald web site.