30 Days of Bloggery: One More Years 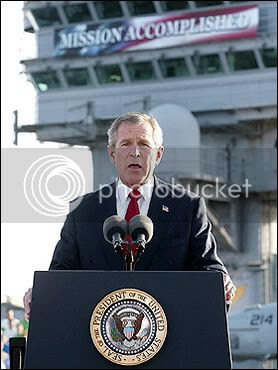 ...So it's just about a year now till George W. Bush leaves office, a notion which fills an awful lot of folks worldwide with a calm, pleasing vibe. I'm no fan of the man, didn't vote for him twice, and yet even I'm astonished at what a bungle his presidency has become, to the point where Republican candidates are actively running away from his blessing. I pictured him being a kind of amiable dunce when he grabbed away the White House, figuring he'd do little harm, be a "uniter not a divider" as he laughably claimed in 2000.

Instead, of course, he's been a dangerous failure. Somehow the terrible events of 9/11 changed him utterly, turning him into a man disdainful of anything save his own unalterable moral compass, surrounded by yes men and sycophants and immune to the way his reaction to 9/11 inflamed a very flammable world even more. Bush seems to lack strategy -- while I disagreed with presidents like Nixon or Reagan, they seemed still to see the big picture sometimes, in dealings with China or the USSR, in a way Bush hasn't.

I'm a student of presidential history, and leaving my personal politics aside, it's hard not to imagine Bush landing in the lower tier of presidents with such luminaries as Harding, Grant and Buchanan. What unites all these men is that they faced a critical moment in history -- reconstruction, say, for Grant, or the Civil War blooming for Buchanan -- and they blew it. Whereas the "greats" -- Lincoln, Kennedy, FDR -- faced those moments are seen as triumphing. It's not entirely unlikely Bush could move up in opinion 20, 30 years from now -- look at how Reagan's stock rose since he left office -- but that means history is going to have to move in an entirely different direction than it's been trending. It's hard to imagine how the invasion of Iraq could be seen as having a "good side." But hey, that's just my view. In the meantime I along with many others are counting down till 2009, when President Clinton II/McCain/Obama or whomever takes office.
Posted by Nik at 4:55 PM