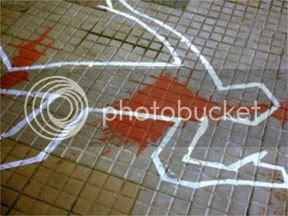 Since I work in the media, I get the constant onslaught of news. And by any standard, 2008 has gotten off to a pretty rotten start in New Zealand. The headlines have come fast and furious: Scottish tourist murdered. Shopkeeper stabbed to death by teen. Teen stabbed by man. Another teen stabs another man. Teen idiots randomly bash people in north Auckland. Some jerk beats up a tourist. It's been a constant litany of bodies found, idiots arrested and more this month, and it's making me quite sad for my adopted country. And we don't even allow guns!

A lot of Americans I talk to kind of have this image of new Zealand as a merry Hobbiton where nothing bad ever happens, and of course, like all romantic images, it just ain't entirely true. New Zealand is a wonderful place, of course, full of natural wonders and mostly great people from all over the world, but there's also a violent undercurrent and increasingly, all the problems of anywhere else. We aren't America and that's great, but sometimes, I look around and see the worst aspects of American culture being absorbed - the gangs, the materialism, the bling-bling and bang-bang. There are much better things we could take from America, I think.

Too much of this violence is being done by or against mere kids under 25 or so, making you wonder just what exactly the hell is wrong with people these days. Everyone's eager to point blame -- is it the video games, the government, the television, or what? New Zealand's always had murders, of course, but the sheer viciousness of this latest round, the sense that this didn't have to happen to any of these folks, is pretty clear. Why is life so cheap to these morons?

I don't know. But I do know by any standard, 10 murders in 28 days (in the short time since this story was written, there was one more) is a pretty rotten statistic, and I hope it's one New Zealand can sort out pretty soon. I wish I had answers, but right now all I've got is anger.
Posted by Nik at 6:07 PM