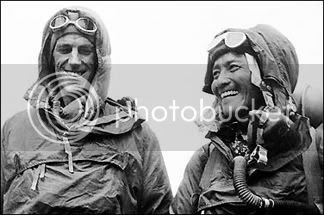 More than a week of mass national mourning ended today as Sir Edmund Hillary was laid to rest, and for an hour or two this morning, much of the country just kind of stopped to watch one of New Zealand's biggest funerals, and paid tribute to the man who's been dubbed "the greatest New Zealander."

Was he? Well, time will truly tell, but there has been remarkably little argument about it down here for now, it feels like. Imagine that in other countries – is there one man that comes to mind as "the greatest American," or "greatest Brit", with little argument? Hillary was a remarkable soul, and while there's been the typical amount of hyperbole one gets when someone this famed dies – let's rename mountains after him! let's declare a national holiday! (all ideas he would've hated from most accounts) – there's also been a fair amount of soul-searching as to what being a Kiwi means.

What's struck me the most in all the reams of Hillary tributes and essays is that his true measure came not so much from climbing Mount Everest, but perhaps even more from what he did after it – continued explorations, but more importantly, he devoted the rest of his life to improving the remote Sherpa communities of Nepal that he so grew to love. Even after his first wife and daughter were killed in a plane crash there in the 1970s, "Sir Ed" didn't give up on Nepal -- he simply, quietly, worked to build hospitals, create schools, and improve lives in a generally non-imperialist, refreshingly humble kind of way. As they say down here, "good on yer mate." It's hard to imagine another figure who "cashed in" on his fame in such a generous way.
Posted by Nik at 9:15 PM