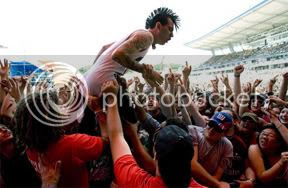 Whoa. To quote my wife, Big Day Out 2008 was "awesome." My first time at New Zealand's biggest concert of the year and Avril's first time in a decade, and we had an absolute blast. With more than 70 bands playing all day long in Auckland, you couldn't see everything, but we got to see the five acts we're quite big fans of, and despite (ahem) pushing 40 we didn't feel utterly ancient.

It's actually kind of fun to look at all the goofy young folks with their mohawks and tri-hawks and tattoos and such and not feel like you have anything to prove yourself anymore about your own coolness. The day seemed divided between fans of the other 69 bands and Rage Against The Machine punters (mostly young, male and shirtless). We skipped that act which we aren't big fans of because LCD Soundsystem was playing at the same time, but no worries, mate -- it was a fantastic show.

I haven't been to a ton of other big festival shows but everything combined here to make this work - hot but not scorching weather with nice breezes, crowds that were gigantic but rarely unruly and still had a bit of space; plenty of bizarre people-watching to be done. Oh, and of course, the music reviews:

Liam Finn
The son of Crowded House's Neil Finn has been winning praise for his debut solo album, and while we only caught about half his set, it was pretty great stuff -- fuzzy pschedelic pop that felt like a cross between Dad's music and the Beatles, with a hint of My Bloody Valentine. Definitely going to pick up his disc soon.
Grade: B+
Best song: "I'll Be Lightning"

Spoon
I love this Austin, Texas pop-rock act and their midafternoon slot meant we had a great view. Frontman Britt Daniel has an excellent voice that goes between gravelly and silky, and the band's whip-smart pop anthems make for terrific stadium listening. Set was marred by a few technical snafus but otherwise grand.
Grade: B+
Best song: "The Way We Get By"

Billy Bragg
You gotta love Billy Bragg -- who else would tell the audience to "pay attention to the metaphors" in his next song? Fighting the fascists, modern folkie Bragg does half-lecture, half-singing, and is a hell of a lot of fun. His tone skirts the edge of being strident, but his lovely foghorn of a voice and utter lack of irony when he sings about the working man make him that rarity, a totally sincere voice. I'd love to see him do a solo show sometime.
Grade: A-
Best song: A rousing "New England" singalong with the entire crowd. 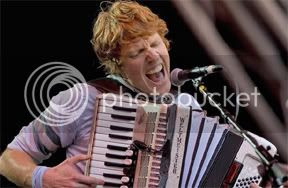 Arcade Fire
Quite simply, the best show of the day and one of the most amazing concerts I've witnessed. This Canadian band's two albums of orchestral rock are dense, passionate listening, transformed live into a circus – all TEN band members taking the stage with instruments like accordions, violins, guitars, french horns and an entire bloody pipe organ, and proceeded to utterly blow us away for an hour with full-energy takes on their songs. It felt like everyone around us had the lyrics memorized, and there's nothing quite like being surrounded by 20,000 people singing "Wake Up." It almost felt like a religious experience, and the band's joyful energy resonated for hours afterwards. Extra points for the guy who climbed up into the stage rigging while still playing his drums. If Arcade Fire comes to your town, don't miss it.
Grade: A+
Best Song: Geez, the whole damn set? 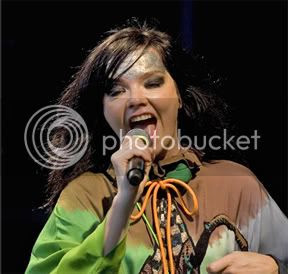 I love Bjork, but yet, her show was the closest to a mild disappointment. Her voice is fantastic, of course, but somehow it didn't feel quite right for her to be playing a stadium at the end of a long hot day right between NZ alt-metal Shihad and the mosh-pitting Rage Against The Machine. Her show had a dazzling visual look, with back-up dancer/singers looking like giant Tibetan prayer flags. But her song choice had too many slow, crooning numbers that just seemed out of place, and too many songs had a really distorted fuzzed-out bass drone that was overpowering. In some ways her show would've been better in a more intimate theater setting where could really see the details. But still, nothing quite like her unearthly Icelandic wail of a voice.
Grade: B
Best Song: A very cool fuzzed-out reworking of "Army Of Me"

LCD Soundsystem
Oh yeah. I knew the man who put out my favorite album of 2008 was going to be fun to see. A perfect way to to end the day, crammed into a humid circus tent and dancing to James Murphy's dance-punk ultra-hip groove. Terrific semi-ironic showmanship, with Murphy backed by a full band (including one of the Arcade Fire) and looking a bit like a big teddy bear howling away on stage. Fantastic propulsive takes on all his hits, backed up by giant video monitors and -- oh yes! -- a hint of the cowbell. As excellent to see live as I'd hoped; the band does a terrific job translating Murphy's studio creations into thrashing live music. I do wish I'd worn my earplugs for the last part of the set, though, because the buzzing still hasn't quite stopped.
Grade: A (minus just a fraction of a point from Arcade Fire because, well, no pipe organ. However, they did have cowbell.)
Best Song: Tie between a stomping "Daft Punk Is Playing At My House" and a 10-minute screaming take on dance anthem "Yeah" that practically sent me into another state of reality.

Truly, a fantastic day and one of the best overall concert experiences I've ever had.

* Photos taken from the New Zealand Herald website, all rights them mate.
Posted by Nik at 9:05 AM