...It's 2008, a bold new year, and while I'm not a big New Year's resolution man I thought I'd try something out anyway for the month of January to perk up my blogging skills a bit after a rather slow couple of months. That's right, it's 30 Days of Bloggery, in which I will attempt to post something on here every single day to astound and amuse you constant readers! Can I do it? Will I run out of things to say? Will anyone care? Stay tuned! 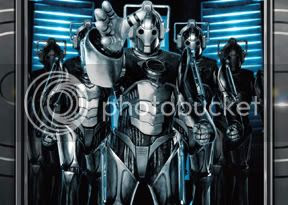 So in our dazzling way, we welcomed in 2008 last night with a "Doctor Who" marathon watching the final 3 episodes of Series 2, which we've been catching up on. (We watched and got addicted to the third series when it aired here last year, but missed Series 1 and 2 when they aired.) Terrific stuff as usual from what has to be the best show on television right now. The free-for-all Dalek/Cyberman battle of Canary Wharf and the fate of Rose added up to make it a real nailbiter. Can't believe I missed watching this when it aired, but in a way it's been more fun to pick it up en masse on DVD. But now we're just about out of new "Doctor Who" to watch until Series 4 airs sometime this year. Boo!