The Old 97's: Saddle up for Blame It On Gravity

"Cowboy poetry" is one of those phrases you sometimes hear and don't know quite what to make of it. Odes to sagebrush and saddle sores, perhaps? But the music of The Old 97's, with its high lonesome sound, always felt like a kind of cowboy poetry to me. The Dallas-spawned band draws on country music to create something that's not quite alt-country – it's a smoother sound than, say, the grittier Uncle Tupelo or Whiskeytown. Instead, frontman Rhett Miller uses the twangs and tropes of country music to create impeccable pop. Back in the 1990s, seeing them live felt like watching punk crash a rock concert at the grange hall – a thrilling and feisty clash of styles, all led by Miller's wide-open yearning voice.

Miller puts an urgency into his crooning laments, a kind of breathless impatience that gives the songs a jangly momentum. He's got a knack for great little turns of phrase – there's a line in "Doreen" off 1995's Wreck Your Life that still amazes me with its economical way of summing up one girl's life so far in a few words: "She lived in Berkeley til the earthquake shook her loose ... She lives in Texas now where nothing ever moves."

It's a shame then that the band has never quite broken through to the mainstream, despite a string of great albums – you can't go wrong with Wreck Your Life or 1999's Kinks-like Fight Songs, in my book. 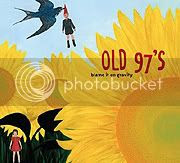 Miller took time off for a solo career which was less country, more pop, but after a bit of a hiatus the 97's of old are back with Blame It On Gravity, 13 songs of wistful romance that return to the country roots of the band's earliest work. Nearly every song is about the broken-hearted or the nearly so, yet Miller's crystalline voice always keeps a hint of optimism among the woe as the band swings between hoedowns and slow burners. "Dance With Me" has a propulsive drive backed by soaring guitar lines, as Miller spits out his declarations: "Underneath the foreign stars / In a foreign place where they don’t love you – I do care." "The Color of A Lonely Heart Is Blue," sung by bass guitar player Murray Hammond, is the kind of song you can imagine being played at the campfire at sunset.

Gravity is a return to form for the band, with empathetic rock anthems waiting around every corner – "The Fool," "Ride," "I Will Remain." While country is the flavor, there's welcome and varied influences. The distorted fuzz-guitar of "Early Morning" sounds like Sonic Youth meets Merle Haggard, while "She Loves The Sunset" has an island-reverie swoon to it. "My Two Feet" is jangle-pop straight out of the Byrds/Beatles handbook. There's a confidence in their material that shows the hiatus has done them good. They've staked out a niche and are at home in it, and lord knows you never can have too many love songs.

For longtime fans, Blame It On Gravity is like a note from an old friend. For newcomers, it isn't a bad place to start at all. It's cowboy poetry that rides smooth the whole way down the trail.
Posted by Nik at 2:01 PM