OK, this is a weird issue to continue my alphabetical countdown of my favourite comics over the years. 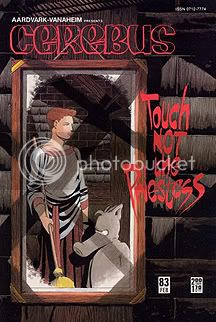 On the face of it, Dave Sim's Cerebus #83 is actually one HELL of a boring comic - the middle of a verrrrry long storyline and a bizarre digression that I'm still not quite sure makes much sense, in which a housewife basically spends the entire issue giving a rambling monologue to our aardvark hero Cerebus. It's right in the middle of the epic "Church And State" storyline that ran like 60 issues, but it's a strange pause in the action – lots of exposition. "Church and State" is overall a fantastic storyline. But this issue – really, not the best part. (The teaser at the end of the issue even acknowledges this, saying "Next: Patience, Folks, She's Getting To It.")

I picked Cerebus on a whim, not really "getting it." Yet this and a couple other random issues I bought around this time stuck with me. There was a sense that there was a heck of a lot going on here I didn't understand, and the sheer denseness of it all intrigued me. There was something going on here that was a lot more ambitious than most comics I read. I was mostly a Marvel and DC superheroes kind of guy, and the ornate beauty of Dave Sim and Gerhard's black and white artwork was amazing. (Dig all those zillions of little crosshatches in Gerhard's background - every grain of wood on the beams! I still don't understand how the man had the patience for that.) A little later, around "Jaka's Story" I think, I started buying Cerebus full-time and kept on with it up and down (mostly down, sadly, in the final act) till #300 in 2004.

But here's the main reason Cerebus ranks for me - I met my wife through it. Yep, I wouldn't be here in New Zealand without Cerebus – y'see, my wife read Cerebus too, and I had a letter printed in it circa #150 that she read. She was looking for American pen-pals and so we began exchanging letters ... and give or take 7 years or so of friendship, long-distance courtship and other diversions, we ended up together, spawned a baby boy, and still like to read the comics together (she's not big on superheroes though). It's strange to think what my life might have ended up like if I hadn't randomly tried out a few issues of Cerebus back in the 1980s.

As for the comic Cerebus – well, about halfway through I think Dave Sim lost or fatally redirected the plot big-time, and the story basically became a series of absurdist set-pieces that never quite led anywhere. I read it to the end out of a sense of duty, but honestly, post-#200 it sputtered out. His own peculiar obsessions about gender and religion took over the story, obscuring it. The creator overwhelmed the character. The sense of fun, of mystery and hidden potential that I found in my stray issue was never quite met. But for sheer longevity and skill, it's still one of the milestones of the comics medium.

However, I did net a wife and kid out of reading this comic, so y'know, there's that. I owe Cerebus a lot, arguably more than any other comics I've read.