In the home stretch now! Hard to believe when I started this way back when and the goal of watching every single episode of "Buffy The Vampire Slayer" seemed yes, highly ambitious indeed. (Some people climb mountains, some people run marathons, some people watch a hell of a lot of TV shows about vampires.) Now there's just one season left to go – what will fill the aching hole in my life? I'll have to take up yoga again or something. 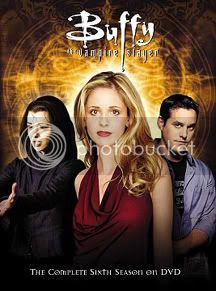 Anyhoo ...Season 6. There's something about this season that's a bit hard to put my finger on, but it's a little less confident than previous seasons. This was the first one without creator Joss Whedon running the show, and maybe that's it. While it's almost always entertaining, there's a sense sometimes that the characters aren't acting "realistic," such as with Anya and Xander's on-and-off wedding.

The unrelenting darkness of Season 6 is a theme, and it's nicely wrapped up in the entertaining final episodes. I mean, I thought Season 5 was grim, what with Buffy's mother dying and all, but boy, this one piles on the misery. Willow's journey this season from hero to villain is well foreshadowed (occasionally a bit ham-handedly) and ends in suitably apocalyptic fashion. The finally consummated relationship between Buffy and Spike, however, wallows a bit too much in a kind of sadomasochistic glee. Also, Anthony Stewart Head as the upright, paternal Giles is sorely missed for most of the season.

I really enjoyed the recurring geeky villainy of "The Trio," three put-upon super-brains who gradually become a real threat for the slayer and her friends. It's kind of refreshing to see non-demonic enemies and the writers cannily make you underestimate the Trio until it's too late. Warren Mears, in particular, is a nasty portrait of the evil that can fester in an unloved, spiteful nerd. What ultimately happens to Warren pushes the envelope about as far as this series has ever gone.

Best episode: While it's a grim season, it also boasts one of the best and wittiest "Buffy" episodes ever, the all-musical extravaganza "Once More With Feeling." The idea of a musical episode isn't totally unique, but what's impressive about this one is Joss Whedon (who returned to write and direct this gem) uses the gimmick to create some real emotion and revelation about the characters. Conflicts that have been bubbling under come to the forefront, and it doesn't hurt that the melange of musical styles is excellent fun. (And it turns out Anthony Stewart Head and Amber Benson as Tara are actually quite good singers.) A funny, heartfelt and gripping romp on the stage. (And go check out the also quite excellent new Joss Whedon production "Dr. Horrible's Sing-Along Blog" to see how kooky is it to see musical theater grafted onto the superhero epic.)
Posted by Nik at 4:48 PM