The other big election in 2008

..Yeah, it's hardly gotten the same amount of ink worldwide as the US one, but New Zealand is also having major leadership elections this year. It's my first time living here through the electoral cycle, and it's been quite interesting figuring it all out. I'm still an extreme novice to New Zealand politics (even if I have met the Prime Minister). This year's race will pit the Labour Party and its leader, Prime Minister Helen Clark, against the National Party and its leader John Key. 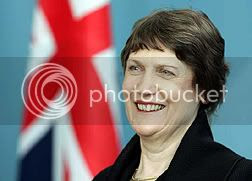 New Zealand's system is a parliamentary representative democratic monarchy (phew!) -- basically we're still part of the Commonwealth, with Queen Elizabeth II as our head of state. The actual work of running the country is done by the Prime Minister and Parliament. It's highly likely that in the next 30 years or so you'll see NZ and Australia both become republics, but it won't happen while Elizabeth is still alive, I think.

The big players in NZ politics are the Labour Party – Helen Clark has been leading the country since 1999 -- and the National Party. Labour is generally seen as more left-leaning. Fellow blogger Arthur at AmeriNZ always has good thoughts on the NZ political scene, and a while back he had a nice summation – generally here politics are to the left of America and Australia. Even our "Republicans," the National Party, would be considered moderate or "blue dog" Democrats in the US; conservative economically, but not really about setting social agendas. The far-right conservative wing is far less influential here, consigned to minor parties like NZ First and ACT.

Elections to Parliament here run under the MMP (mixed member proportional) system, where you can split your vote between a candidate and a party. (I.e., you can vote for the Labour MP, and then vote for National as a party.) This means that none of us really choose who the next Prime Minister is going to be, but rather the party that will be in power. Under MMP each MP is either elected by voters in a single-member constituency via first past the post or appointed from party lists. So it's a combination of direct representatives and "at-large" party members in the Parliament. You frequently see Labour or National forming coalitions with the smaller parties to get the 50-percent vote threshold to have a government assembled, so minor parties in general such as the Greens or Maori Party have a much bigger say in things than they do in the US.

So that's a very broad and likely incomplete 30-second summary of NZ's system (far more can be found at the ol' Wikipedia). What about this year's race? 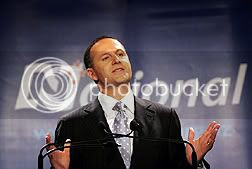 What it all boils down to this year is a referendum on Helen Clark, and unfortunately it's looking very likely she won't win a fairly unprecedented fourth term. Little of this is due to the inspiring rhetoric of John Key, a former investment banker and general empty suit who has yet to say much of what he would actually DO if Prime Minister. I don't find Key actively objectionable, but vaguely faceless and a little slippery. Clark's biggest foe is the general impression she's "had long enough" and even though NZ has done pretty well under her, it's been a dismal year with the economy slowing and a steady drumbeat of violent crime and gang worries. Labour is frequently seen as overreaching lately with its policies and the words "nanny state" get bantered around a lot. People are just "ready for a change," as the saying goes, and at this point anything bad that happens is blamed on Labour.

It's unfair that a good politician is seen as having a sell-by date, but I guess most folks are turned off by someone being in office more than a decade. I get the same vibe from her press that the ex-Australian PM John Howard was giving off right before he got the boot -- basically, she can do no right in the voting public's eyes, and that's a pretty hard place to come back from. We don't know when the election exactly is yet (like in Britain, it has to be "called"), but it'll have to be before November 15 according to law. Key basically has to stand back and not have any major scandals, and he'll probably be the next Prime Minister. The election could still hold some twists and turns, but few of the omens are in Labour's favor. Ah well - at least I get to vote in TWO countries' elections this year!
Posted by Nik at 8:57 PM