No use crying over spilt milk 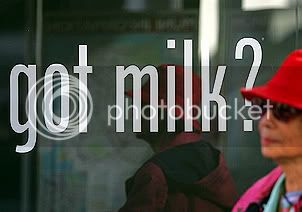 ....So after a couple of months of quite painful stomach cramps and other fun stuff like that, and a few visits to the doctor and assorted sundry prescriptions trying to figure out my woes, I think I've got it sussed -- it looks like I've become lactose intolerant in my doddery old late 30s. Yeah, as far as health issues go, it could certainly be a lot worse, but I have to admit, I have always been a big consumer of dairy products. From the age of 6 years old or so I'd drink probably 6-8 cups of milk A DAY. Which is a lot. I don't smoke or drink much, but I needs my milk.

Lactose intolerance is one of those weird things you hear about but don't pay much attention to until it affects you. Basically, the gist of it is that your body is unable to metabolize the sugar lactose found in mostly dairy products, as the enzyme you need is either missing or decreased. Some folks are like this from birth, while others, like me, develop it later in life. A lot of people get this -- Wikipedia claims 75% of the adult population worldwide are lactose intolerant, a figure which seems rather high to me. People who have it have all degrees of tolerance as well.

Really, it's not a big deal in the general scheme of things - it's not diabetes, for instance. I'm just rather lazy about changing my habits which is probably why I didn't sort this out months ago when I started having these problems. I realized a few weeks back that I was in utter denial about milk being the problem, and my stubborn idea of "scaling back" was to cut to 2-3 glasses a day. Now after an epiphany for about two weeks I've gone cold turkey, with no milk and only a few bits of cheese here and there. (Cheese is reputedly "better" for you if you're lactose intolerant.)

I'm generally feeling a lot better -- not 100%, but a lot less of this rather painful bloating kind of feeling that was keeping me up nights on and off since last November or so. I've even realized there are lactose-free dairy products available (I told you, you don't pay much attention to this stuff until it happens to you). I've tried a bit of lactose-free milk this week to see and it's all right; a bit sweet compared to the fat-free milk we've drank for years, but not terrible by any means. If I have a dash of this stuff now and again I probably won't even miss my old friend milk all that much, I guess. We all have to change our habits eventually.
Posted by Nik at 4:31 PM