So I never really wrote about our Mega America Trek last fall like I'd intended to, just a brief synopsis of our 5,550-mile, 10-state journey. I figure now I've got the time to do occasional closer looks at our whirlwind adventure (which we're still processing – so much happened in the final few months in America that it's a bit of a blur really). And share a few more photos! (Many more of our trek are up on our Flickr page.)

South Dakota is one of those states I'd always wanted to visit, but it's a hell of a long way from anywhere else. There's something mysterious and epic about it in my mind – the Great Plains, the Wild West, the vast unfolding land thousands of miles from any ocean. When we were planning the Mega Trek, we were going to stop in Colorado and head back, until I realized that South Dakota was probably only 6-7 hours north of where we were visiting a friend in Greeley. And there's a lot crammed into a hundred-mile radius of South Dakota that I'd long wanted to see – Mount Rushmore, of course; the town of Deadwood; Badlands National Park, even Rapid City. 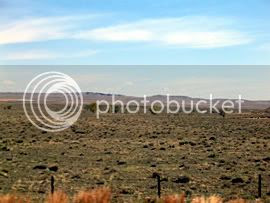 We rolled into the Black Hills at the end of a long dusty journey through southeastern Wyoming, which is just wide-open emptiness. Even Cheyenne, the biggest town in the state, felt like a time capsule from the late 1970s. It was a good seven hours of scenery like this view to the right – and we also passed through Lost Springs, Wyoming, a blip on the map which boasts a population of one. I kid you not.

We snuck into South Dakota in the early evening to find our campground and collapsed. The following day we packed about a week's worth of sightseeing in. Our first stop was Jewel Cave National Monument just down the road from our campground. 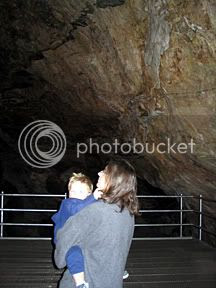 This was a place I'd never heard of before our trek but it turns out it's the second longest cave in the world, buried just under the Black Hills. It's filled with rare gorgeous crystal formations and sprawls on in winds and turns for miles and miles. (It's still being mapped to this day.) Unfortunately, with a squirmy 2 1/2 year old we couldn't do any serious spelunking and had to take the "Discovery Tour" which basically just showed us one big room of the cave. But it was still pretty cool, as we and the tour guide were the only people there early in the morning. The guide told us about the cave and showed us some of the namesake "jewel" formations. I really would have loved to go on a longer tour, but kids do cramp the style sometimes and you just move on.

And we had more to see in our Black Hills tour! 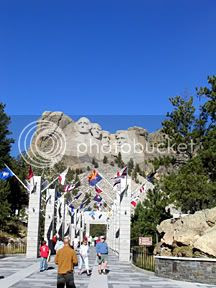 Next stop was Mount Rushmore, which is, yes, overexposed and touristy and yet still one of the more impressive U.S. monuments I've seen. The drive was nice because you come around the back of the mountain and wham! There's the famous faces, Jefferson, Lincoln, Roosevelt and Washington. Like most big things, it was a little smaller than I expected, but still an elegant piece of work, in a nice harmony with the hills around it. (You never really see the rest of the mountain in photos of Rushmore, but it's got this rugged character to it.) We spent a couple hours at Rushmore soaking it all in. It's got a carnival feel because even in early October there were lots of tourists from all over the world there, at this remote spot in South Dakota. Everyone seemed kind of happy to be there and there was a cheerful mood. I'd hate to have visited in July, though! The approach and surrounding site has been nicely constructed to show off the monument, with an avenue lined by huge pillars flying every state flag. I felt like they succeeded in making it feel like an occasion but not too overblown. 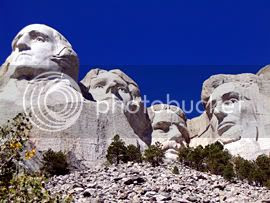 The faces themselves are the main attraction, and I was really impressed by how they changed depending on the light. While the faces appear smaller than you'd expect at first, as you walk along a nice woodland path that runs in front of them their scale becomes more apparent. Sculptor Gutzon Borglum's designs were calculated to work with the light and surroundings very well, I felt. I simply watched the day play over the faces for a while, the movement of the shadows. I know there's controversy about the monument's appropriateness in relation to the Lakota tribes, but I have to admit that on this fine fall day with the aspen glowing and the sky blue, Rushmore felt like a pretty sacred place.

We stopped for lunch in the flyspeck town of Keystone just down the road from Rushmore. While Avril and Peter ran around at a park for a while, I just had to check out the National Presidential Wax Museum. I'm a presidential history buff, and kitschy as this thing sounded, I figured I had to check it out - when would I get a chance again to see a wax Calvin Coolidge? Besides, it was only nine bucks. While it was indeed very kitschy, it had a homespun charm and was kind of oddly fun in the way that strange tourist trap attractions can be – most of the 40 statues were made by the same woman, who had a lifelong dream of being a wax figurine maker (who doesn't?). Gerald Ford was the best, lifelike enough to be kind of creepy, while some of the lesser presidents like James Buchanan looked the least like their real-life counterparts (Buchanan looked vaguely like Elvis in a white wig). By far the best wax museum devoted to American presidents that I've been to, though.

Next up, we drove an hour or so north through the winding Black Hills to Deadwood, the old historic mining town. 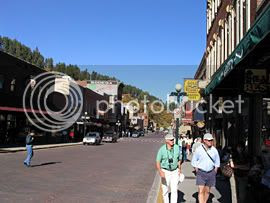 We'd become big fans of the profane and profound HBO series and decided to see what Deadwood looked like in 2006. It's obviously not much like it was in the 1870s (a huge fire burned down most of the town back then, so nothing much remains of the muddy streets and wood buildings era), and since they legalized gambling a few years back, it's more another casino rip-off attraction than anything else. On a warm October morning, clumps of overweight gambling tourists shuffle down the sidewalks, digital cameras around their necks and gaudy T-shirts on their chests. Some of them probably don’t know Deadwood as anything but a gaming paradise livening up the Black Hills. There's lots of tacky monuments to the town's bloody past (see the chair Wild Bill Hickok was shot in! Although it might not actually be the real chair...) and a general bloated malaise, despite some nice old brick buildings and a decent walking tour that shows you where the historical sites were. 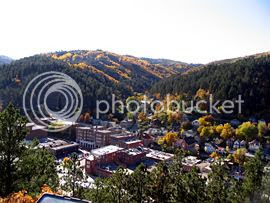 My favorite part of the real Deadwood was "Boot Hill," Mount Mariah, where Wild Bill Hickok and Calamity Jane are both buried. Up a very steep road from the main town, it's got a fine view of the whole town. The aspen are gold and blooming, filling the valley with golden splashes. From way up here, you squint and you almost can see Wild Bill, Sheriff Seth Bullock and the rest splashing through the mud and grime of more than a century ago. Here, surrounded by the pines and aspens and silent gravestones, all the modern-day distractions melt away for a few minutes. A beautiful bust of Wild Bill marks his grave, and hundreds of other pioneers also rest up here. While the town of Deadwood isn't particularly amazing today, Boot Hill is worth seeing.

Yikes, this is already reaching epic proportions and I haven't even reached Rapid City yet! I'll continue sometime soon with the climax of our South Dakota adventures into the Badlands and bison and beyond.
Posted by Nik at 9:02 AM

Email ThisBlogThis!Share to TwitterShare to FacebookShare to Pinterest
Labels: the US of A, travel