Hmm, I meant to do a "movies year in review" post like the other ones I did on comics, music and books, but somehow I never got around to it and now it's halfway through January, so... Anyway, I didn't see a blue ton of movies this year, still missed "The Departed," "The Queen," "Dreamgirls," "Pan's Labyrinth" and several others I'd like to check out eventually. But one movie I keep coming back to is one I finally saw a couple weeks ago and man, I just can't get it out of my head. To quote the 14-year-old lurking in my brain, "It rocked!" 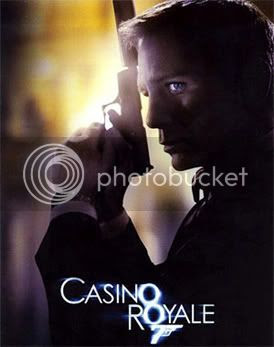 I speak of course of "Casino Royale," which was the first James Bond movie I think I've seen in the theater since 1984 or so. I'm a moderate Bond fan, seen most of the flicks, but in my humble eyes many of the movies have been half-baked, cool moments interspersed with boring cliches. I always figured Pierce Brosnan looked swell, but the movies I've seen were pretty rotten ("Die Another Day" is just godawful, isn't it?).

But when Daniel Craig was cast as the new Bond, I was actually kind of excited - he'd been the best thing in movies like "Layer Cake," "The Road To Perdition" and "Enduring Love." And he measures up superbly in "Casino Royale," giving a performance that takes the surly Scotsman Sean Connery's template and gives it a postmodern spin, with a cruel glamour all his own. I didn't even notice for most of the movie that Bond is now blond. 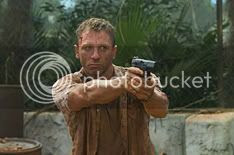 What's key about James Bond and somehow got overlooked in the Bond-as-superhero era is that he isn't really a very nice guy. He's a government-funded killer, a hard-hearted bastard who's on our side but whom you wouldn't really want to meet. Ian Fleming's original novels nicely showed this Bond, but over the years, Bond got softened up for the movies. Pierce Brosnan was so suave and cuddly he looked like a cologne advertisement.

But, taking a key from "The Bourne Identity" model, director Martin Campbell and co. reinvent Bond in "Casino Royale," scrubbing away the gadgets and sci-fi plots to create a lean, mean and extremely stylish film. "Casino Royale" has a plot that's fairly easy to follow and thankfully doesn't fall back upon "world domination" for its kick. The bad guy here funds terrorism, and it's made implicit that his downfall won't really do much to make the world a better place - a hundred more will spring up like him. There's a kind of existential bleakness to "Royale" - we do this because it's what we do, not because it makes a true difference, it seems. 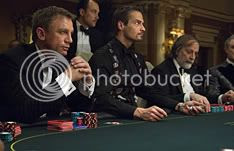 There's something about getting a 'real' actor in the role of Bond. Craig's smouldering Bond is a bit of a thug, but also has a mean instinctual intelligence that saves his bacon again and again in "Royale." He's not a glamour boy, but has the potential to be one (one of my favorite scenes in "Royale" is the first time Bond dons a tuxedo, looking a bit like a gorilla sent to a tailor). And this younger Bond hasn't quite learned to be unemotional, a recurring theme in "Casino Royale." He falls in love, and it hurts him. The romance here has more kick than the romance in the last half-dozen Bond movies put together, frankly, because it feels sincere.

What surprised me is how action-packed "Royale" is, starting with the smashingly dark opening sequence, and an outstanding foot race chase that just ups the ante. Yet the central dramatic sequence here is a card game, filmed with tension and simmering violence. The fights here hurt and are filmed with real low-fi grit; but all the action feels in service of the story instead of the other way around. The directors here pay nice homage to the previous Bond movies (I particularly like the opening and closing sequences), but "Royale" stakes out a new ground that makes it feel truly novel; a nice feat after 20+ Bond movies. It takes the spy clichés and gives them emotional weight. It ain't perfect – Chris Cornell's theme song stinks, the carnage at the ending is a little too over-the-top, and some of the developments in the plot are predictable – but it's the best Bond movie I've ever seen, I'd have to say.

Honestly, if I had made a top 10 movies of the year list, "Casino Royale" would easily be in the top rungs, which I wouldn't have imagined before I saw it. It's made me care about James Bond for the first time in forever, and really eager to see what they come up with in round two.
Posted by Nik at 12:20 PM