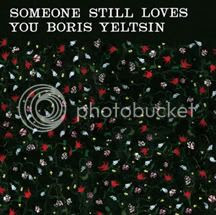 Someone Still Loves You Boris Yeltsin might boast one of the most absurdly unwieldy names in music these days, but their tunes are fine simple, unpretentious pleasures. The band name sticks in your head, and it's kind of goofy, kind of cool. But Broom, the band's debut CD on Polyvinyl Records, is a sincere joy, warm and hook-filled low-fi indie pop. It's an incredibly confident debut. None of the four members of Yeltsin – SSLYBY for short – are out of their early 20s, but it's a world-weary, gorgeously forlorn set of songs. It came out of nowhere in that Internet-fed fashion – SSLYBY threw their homespun tunes up on a web site, they caught the attention of the blogosphere, and the next thing you know SPIN magazine is giving them a shout-out as a band that could "succeed the Shins." Big words, but Broom itself is an eager answer to it. Originally recorded in a band member's home and sold in CD stores around their Springfield, Mo., stomping grounds, it's got a scruffy amiability that still manages to feel a bit fresh and new.

The campfire anthem "Oregon Girl" is an utterly charming piece of summery jangle-pop — it feels like an undiscovered early 1980s college-radio track, although it was featured on "The OC" in one episode. "I Am Warm And Powerful" channels the guitar-ridden angst of Weezer into a harmony-laden, stop-and-start ode, while "What'll We Do" is pure Elliott Smith homage, complete with bouncy piano lines. "House Fire" definitely has a whiff of The Shins about its riff-tastic guitar line and high-reaching choruses. Yet while this young band still wears their influences on their sleeves, there's hints of a deeper originality to come. "Anne Elephant" has an anxious, jittery Pavement-esque feeling, lurching about with amusement-park howls and whistles; it's the oddball track on Broom, but it's also perhaps their most unique.

Fans of The Shins or Wilco would do well to check these Yeltsin-ites out. They're the rare case of a buzz band that's got the wings for a potentially major-league career ahead of them. I'll be eager to see how their in-the-works follow-up to Broom shakes out.

Confidential to A in NZ: Happy birthday, m'dear!
Posted by Nik at 9:29 AM