Movies I Have Never Seen, Part 2

As I wrote a while back, there are lots of movies in the world, and lots of classics I haven't seen. Here's a few more I've checked out in recent months for the very first time:

IN THE HEAT OF THE NIGHT 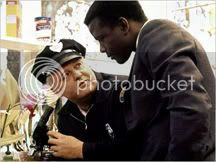 Why it's famous: Won Best Picture Oscar of 1967 against contenders like "Bonnie and Clyde" and "The Graduate." Starring the great Sidney Poitier and Oscar winner Rod Steiger. Takes on tough racial issues.
What I thought: I'd been meaning to watch this for ages, especially after reading Mark Harris's superb book "Pictures at a Revolution: Five Movies and the Birth of the New Hollywood," which examines each of the five Best Picture nominees in this game-changing, transitional year for American film. It's a movie that can seem a tad hokey in 2009 -- black city cop helps solve a crime in backwards small town Mississippi, dealing with racists galore -- but all you have to do is remember how it really was a mere 30-40 years ago for black folks to know that Poitier's character's experience is no exaggeration. Poitier is wonderful as the tough talking "they call me MISTER Tibbs," adding a bit of necessary outrage to his typical near-saintly character repertoire. But Steiger is equally great in the harder role as the racist small town cop who starts to learn something about the wider world.
Worth seeing if you haven't: Well, I do think "The Graduate" and "Bonnie and Clyde" are, in hindsight, far more important movies, but I can see why this won the Oscar in turbulent 1968 (just after the assassination of Martin Luther King, too). The biggest problem viewing the movie today is that it's a bit of a fixed time capsule of the way things were then, but it still holds up pretty well. I found the major flaw to be that I never really cared about the murder mystery that is the instigator of the movie's plot, though. It fails as a detective story but is a great character study.
Grade: B+ 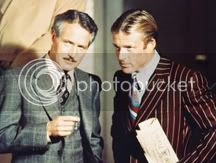 Why it's famous: Won Best Picture Oscar of 1973. "The Entertainer" jaunty piano tune that just won't get out of your head. Robert Redford and Paul Newman, together again and up to no good.
What I thought: I was expecting a classic buddy comedy with bite a la Newman and Redford's "Butch Cassidy and the Sundance Kid," but have to admit, I was a bit let down by this one, finding it a bit cloying and artificial. It's never a bad movie per se, but it seemed slight to watch Newman and Redford's grifter con Robert Shaw's gangster in the kind of hugely elaborate, over-the-top setup that movies of this nature seem to specialize in, and it all leads to an ending that's highly predictable. It's curious to watch a movie from 40 years ago that strives to be a homage to another era 40 years before that one -- it's kind of like a double negative, seeing movies from the '70s set in the 1930s, with the garish lighting and colours of the 1970s prevalent. But Redford and Newman are never less than charming, with Newman particularly solid, and they go a long way toward making the movie work. Perhaps I was just expecting something a bit more from it, but in the end it all seemed a bit too long and wrapped up in its own intricacies to mean much more than a con game gone supersized.
Worth seeing if you haven't: Sure, but in the end you might feel a bit conned if you're not in the right mood.
Grade: B-

THE TAKING OF PELHAM ONE TWO THREE 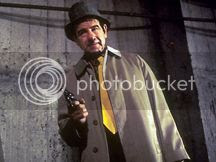 Why it's famous: News of the recent remake of this with John Travolta got me curious to see the original, a gritty 1974 action flick starring -- Walter Matthau?!? The prospect of hangdog Walter Matthau, action hero, piqued my interest.
What I thought: There's something I love about almost any film set in New York City in the 1970s, dingy, sassy and multicultural (before there was such a word) and full of angry, shouting men. "Pelham" isn't any particularly deep movie but it's a very fun thriller about a subway train hijacking by a seedy bunch of criminals led by a great, sneering Robert Shaw (him again!). Matthau is the humble transit cop who gets wound up in the action. Matthau's character actually spends much of the movie just talking on a radio, but it works. A lean, mean ride - the characters basically have no interior life, and in its quasi-real time setting it's almost like a very special episode of TV's "24." Starring Walter Matthau as Jack Bauer, that is. Which would be totally awesome.
Worth seeing if you haven't: Some folks don't like watching movies set in an era when everyone wore bell-bottoms, but fashion aside, "Pelham" is a great little roller-coaster ride. It might seem a tad sedate in an era of CGI explosions (I'm sure the remake amps up the action approximately 1000 percent), but I loved it.
Grade: A-
Posted by Nik at 9:16 PM