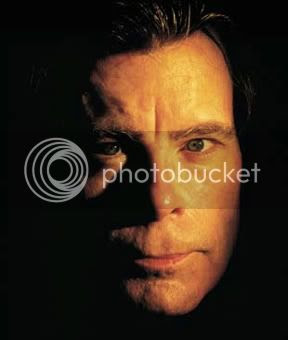 Whenever I'm asked about my favorite writers, the answers are different depending on what day it is. But there are constants, and usually, my favorite writers would have to include George Orwell, the late John Updike and Kurt Vonnegut, Haruki Murakami, Paul Auster, and... Stephen King.

That last one doesn't always seem to fit to everyone when I say his name. Unfairly, King has somehow been lumped in with the Wal-Marts and Starbucks as ubiquitous shorthand for American junk culture. I think King surely gets the short shrift as a writer; he isn't a literary gamesman like Auster or Updike, which he would gamely admit, but he is one heck of a storyteller. King's books to me have always brought to mind cheeseburgers -- nothing rare, nothing fancy, but done right it can be the perfect meal. He knows his strengths, and can tell a heck of a yarn to while away the hours with.

I'm a big King fan, and although not quite in the "superfan" realm of having to read every vowel the man has ever typed, I have read pretty much all of his books, under his own names or pseudonyms. And King can soar or he can slum it -- but I don't feel like he's run out of steam yet. While his books aren't quite the "event" they once were, some of his later works stand up there with his best earlier ones. Here's part one of an occasional series of Complete Succinct Reviews of Stephen King:

Carrie: King's first book is gimmicky and raw, but the story of doomed Carrie has all the hallmarks King would develop -- empathy, gruesome gore and propulsive momentum. It's interesting how this one uses some experimental storytelling techniques (letters, newspaper accounts) to flesh out the story. However, I've always felt like it kind of lacks real character definition -- even Carrie, for all her sad drama, is a bit sketchy. Grade: B-

Salem's Lot: Still finding his way, but this spin on the vampire legend is starting to feel more like "classic" King. A big sweeping cast of characters, grim creatures from the past coming back to haunt a small town, and nasty deaths and carnage galore. It's also extraordinarily bleak, a tone King would come back to in later work such as "Pet Sematary." Evil in King's books is rarely truly defeated for good, and "Salem's Lot" gives us a glimpse of how dark it can get out there. Grade: B+

The Shining: And here King truly explodes forth. Sure, we've seen the movies (both versions) but the original book is still the best take on Jack Torrance's endless winter in the Colorado mountains. Rich with detail and moody feeling, I feel this is the first time King really manages to break beyond pulp fiction and tap into something primal (the thing in the bathtub -- brr!). It's hard to read this now without summoning up Kubrick's wonderful but very different movie, but the original book is still one heck of a fine ghost story. Grade: A-

Night Shift: King's short fiction is sometimes overlooked except as raw material for some truly terrible movies, but the early stuff has the pulpy horror of the EC classic comics -- nasty monsters, twist endings and horrible ironies galore. This was one of the first King books I ever read, and I still remember the horrible queasy chills I got reading "Graveyard Shift," a tale about... well, giant rats infesting an old mill. There's a gritty charm to this first collection of his short terrors, even if a few fall short of the mark. Grade: B+

The Stand: The first "800-pound gorilla" of King's career, and arguably, his best (tied with "It" for myself). It can be said that King's tried to top this one ever since, with lengthy quest sagas such as "The Dark Tower." While there are bumpy bits for me in the narrative (Nick's sudden fate, the rather clunky ending), the characters here are rich and likable, and King summons up one of the most captivating "end of the world" narratives I've read. If you pick it up now, it's all a bit dated but the top moments -- almost anything involving laconic Stu, the scorched-earth evocations of a dead America -- still ring with a bright passion. Be sure to read the "uncut" version which adds a mere few hundred pages more than the original edition. Grade: A+
Posted by Nik at 12:01 AM