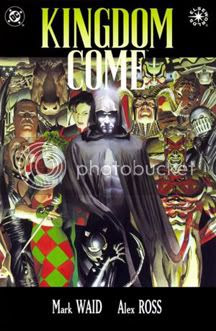 He's been probably one of the most-praised artists of the past 15 years or so in comics, with his distinct photo-referenced painterly style and undying reverence for the classic superheroes, on display in series like "Marvels," "Earth X," "Justice" and many more. When Alex Ross paints Superman, you can see why they call him the Man of Steel -- all granite jaw and stern power, done with a photorealistic detail that often leaps out of the pages.

Yet Ross's sheer talent and reverence also gives way to stiffness sometimes, and his affection for "revisiting" classic superheroes can start to seem a bit dead-end, endless nostalgia without much forward motion. I admire Ross tremendously as a technician – his coffee table art book "Mythology" is a gorgeous testament to his skill -- but I think as a storyteller, he's a bit hit or miss. The characters often pose rather than move with the fluidity of a Will Eisner or Frank Miller. To me, his work struggles to escape the frame of pin-ups.

Lest I sound like I'm bagging on Ross, I think his peak remains his collaboration with writer Mark Waid, 1996's "Kingdom Come," an epic tale of heroism and failure in the future of the DC Universe, featuring Batman, Superman, Wonder Woman and their various protege and successors in a twisting and bombastic morality tale. Ross has a lively power to his artwork here – I don't think I've ever seen Bruce Wayne's face seem quite so spot-on for the character, handsome yet a bit devious and scarred. Ross's aging Superman has also rightly become an iconic presentation. Waid's script is among his best work, too, and he doesn't succumb to the weaknesses that have marred some of Ross's other collaborations. 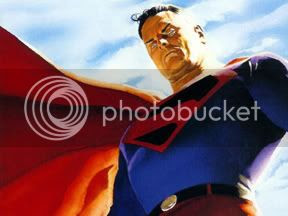 The whole "alternative dark future where lots of characters die" story trope has been done to death, but "Kingdom Come" succeeds because it touches some universal chords about what it means to be a hero. It nicely comments on the comic industry vogue for "grim 'n gritty" killers as heroes in the 1990s. There's a reason staid and steady Superman has remained in print for 70 years now, and Waid shows us what it is.

Many of these big everything-and-the-kitchen-sink tales haven't worked for me because they're so overstuffed, but despite the acres of capes and cowls on display in "Kingdom Come," there's a quiet moral center at the core, nicely portrayed in the humble human preacher Norman McKay. I find myself moved when I re-read "Kingdom Come," something that doesn't happen in a lot of the other big superhero pile-ons. Of course, DC has gone on to milk "Kingdom" for all it's worth, using its speculative alternative future as a basis for endless changes and permutations in the "real" universe. But the original is still a hell of a read, and marks Alex Ross' apex as a creator I think.