One of the first comic books I ever read was an issue of "Justice League of America," circa 1980. How could you go wrong with Superman, Batman, Wonder Woman and more all on one team? More heroes for your money. The Justice League is the Greek Pantheon of superhero comics -- but it's a shame the potential of the title has rarely been met. For much of its 40+ year existence, the Justice League weren't really all that super. They were a club, rather than an army. Memorable tales were far apart. 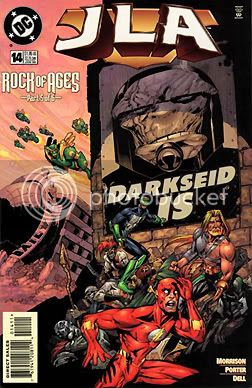 Until writer Grant Morrison got a hold of it, for a run in the late 1990s, and made the "JLA" must reading for several years. He got back to "the big Seven" -- Batman, Superman, Wonder Woman, Flash, Aquaman, Green Lantern and Martian Manhunter -- and took the concept utterly straight. Morrison is going for pure, granite-hewed iconic, with his gods-made-flesh watching over the earth (it's no coincidence that their Olympus, the Watchtower, is on the moon). It's by far the most evolutionarily advanced take on the Justice League, which had bounced about in a variety of incarnations from serious to jokes.

Morrison takes a chunk of the "push everything to 11" excess of Warren Ellis' "Authority," with the added resonance of these characters being established legends. Pretty much every foe is massive, every clash threatening to shake the foundations of reality -- which is the perfect way to do the Justice League. If you've got the biggest heroes, go big. Fight Martians, fight Gods, fight the essence of primordial evil itself. I'd rank his run on "JLA" with the best of anything Morrison's done -- I think he tried to recapture the glowering armageddon vibe with the more recent "Final Crisis" but fell short.

By the sixth issue of "JLA", Superman is wrestling with rogue angels. Morrison uses the young Kyle Rayner Green Lantern and Wally West Flash as our "man on the street" heroes, breathless and cocky and amazed to be in the company of legends. "Man, doesn't it ever just hit you how awesome this all is?" Green Lantern says at one point. That's not something you'd catch Superman or Batman saying, but Morrison cleverly uses the younger heroes to give his tales a sense of scale and power.

My favorite sequence of "JLA" issues remains "Rock of Ages," which started in #10. Morrison throws in everything -- an Injustice League led by Luthor, Darkseid, time-travel, gigantic future hero-gods, magical wishing-stones, the end of the world, holographic duplicates and so many "gee-whiz cool" moments that my fanboy brain ached. The convoluted plot avoids some of Morrison's later excesses. Perhaps the sheerest distillation of Morrison's "JLA" run is a sequence in #14 set in a distant ruined future, where second-tier heroes Green Arrow and the Atom face off alone against the greatest evil in the universe -- and in a fist-pumpingly cool fashion, triumph. (My favorite line of the entire series? "Ray? You and me, man - we just killed Darkseid.") 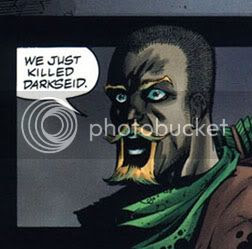 Howard Porter's art on here came up for a lot of flak at the time. His figures are stiff and dense, with fierce black lines and chiseled dynamism. Panels crackle with energy. It's harsh artwork, without smooth edges, and admittedly Porter's anatomy is sometimes a bit rough, but it generally worked well to bring that sense of action movie-times-10 passion to Morrison's impossibly tall tales of heroes and villains. I'd rather look at Porter's art over Jim Lee, myself.