New Zealand's film industry is a relatively young one. It had a slow gestation and only really came into its own in the '70s. These days you've got Peter Jackson, Lee Tamahori, Jane Campion, Martin Campbell and many more who've made NZ film a real heavyweight, and it's a hugely popular place to film (watching "X-Men Origins: Wolverine" the other day, I was pleasantly pleased to see several locations we just drove through on our South Island holiday). We're everywhere in cinema these days, mate!

But that wasn't always the case. I recently viewed for the first time two classic Kiwi films that helped jump-start the industry. They're both paranoid science-fiction tales, and were hugely influential here, although one of them has held up better than the other – 1977's "Sleeping Dogs" and 1985's "The Quiet Earth." 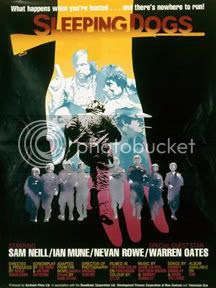 New Zealand: fascist state? "Sleeping Dogs" is referred to as the birth of "modern" New Zealand cinema, although I admit this sometimes labored 1970s allegory is a bit dated now. But in some ways this is NZ's "Citizen Kane," the movie that jolted a moribund industry into creative heights. It features the movie debut of Sam Neill, one of our more recognizable actors who's since gone on to "The Piano," "Jurassic Park" and many more. Neill plays Smith, a family man whose domestic turmoil gets tangled up with a political nightmare in New Zealand. Unspecified unrest leads to the Prime Minister declaring martial law, and rather against his will, quiet-living Smith gets made into a leading figure in the Resistance. Neill is great in "Sleeping Dogs", bringing a fierce intensity to the role that elevates the entire movie, making you believe in Smith and root for his struggle -- indeed, "Dogs" is the kind of film that could've been a lot worse with a different actor. (Some of the other actors are just awful, and American Warren Oates saunters on for a very strange brief cameo.) It's directed by Kiwi Roger Donaldson, who's gone on to do a lot of other films (including "The World's Fastest Indian," NZ's highest grossing movie). Donaldson has a fine eye for composition, and the quiet scenes of "Dogs" play best – the action scenes tend to be rather unintentionally funny, I found. I understand that "Sleeping Dogs" rampant paranoia reflects the late '70s zeitgeist, and forecast the tensions that came from the South Africa world rugby tour of NZ. (A very good essay putting "Sleeping Dogs" in context can be found here.) Seen in that light, it kinda works, but from our relatively settled modern perspective, I still kept getting jarred out of the movie by its vision of New Zealand as a neo-Nazi jackbooted fascist state. Beaut scenery, though, which reinforces the ugly brutality of a fascist state surrounded by all this green. 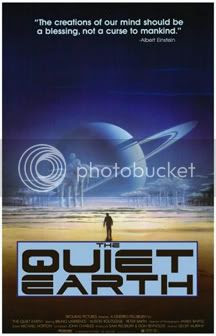 "The Quiet Earth," on the other hand, still plays very well today I thought, with the exception of some dodgy '80s special effects and a few dated moments. In this one, a scientist, Zac (Bruno Lawrence), wakes up one day to find that he may just be the last man on Earth. All of New Zealand appears to be abandoned, thanks to some mysterious scientific experiment. But when Lawrence finds a few other survivors, mankind starts to get complicated again. "Quiet Earth" does the last-man-on-Earth thing a lot better than movies like "I Am Legend," I thought. How would it go? You'd be confused, horrified, probably briefly exuberant, and then bat-shit crazy. The late Bruno Lawrence does a fantastic job, with his rather un-Hollywood face and a kind of controlled mania that works well. The movie also has a rather refreshingly nuanced view of mankind, one that isn't utterly despairing but rather matter-of-fact. I liked the turns Zac's relationship takes with the few human survivors he finds (although the Maori Api is kind of portrayed in a hokey "noble savage" fashion). "Quiet Earth" being set in New Zealand also gives it added power; in the pre-Internet age, being the last man in New Zealand is even more isolating than it might be somewhere else. Where do you go from there? Swim? The ending twist of "The Quiet Earth" is particularly spectacular and thought-provoking, and sticks with you for days. I'd rate it as one of the better post-apocalypse films I've seen, let alone one of the best New Zealand films.
Posted by Nik at 7:24 PM